We use affiliate links and may earn commission from purchases made through those links.
Home / Early Learning / Sensory / Preschool Fairy Tale Fun with Sparkly Queen Princess Slime

I feel I should preface this by saying the slime is for princes and kings, too.  Any royalty would enjoy this preschool fairy tale sensory experience!

However, the girls in my class dubbed it “sparkly queen princess slime” one day . . . and that name stuck!  This activity started out rather simply, then the preschool kiddos took it to new depths!

Find even more ideas for how to make slime with kids here. 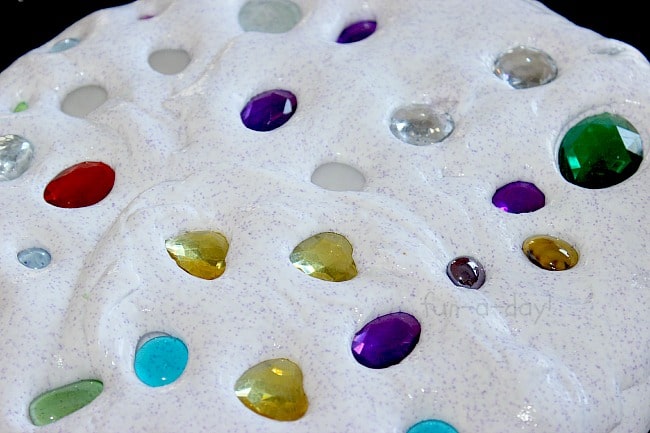 It all started with a basic batch of slime (also known as “blubber” or “gak”).  I began with equal parts white glue and liquid starch, adding more glue until the texture was just right.  It wasn’t an exact science, by any means. Through a bit of experimentation, we found we liked this recipe best:

Squeeze a bottle of white glue into a bowl. Add warm water to the empty glue bottle, shake, and pout into the bowl. Stir the glue and water with a large craft stick. Add liquid starch a little bit at a time, stirring after each addition. We’ve found the best amount of liquid starch is just under the same amount of glue. Knead the mixture until it gets to the right consistency. 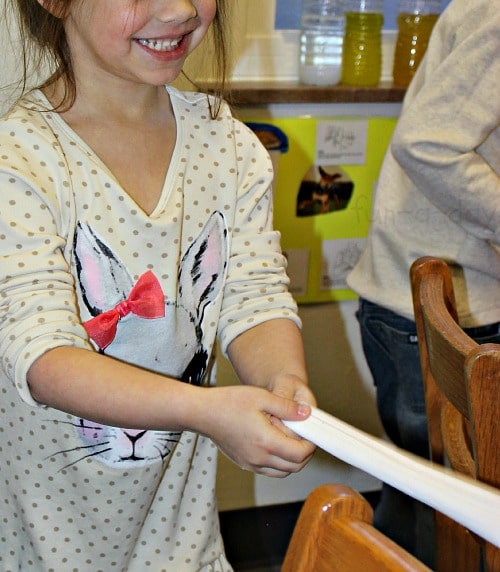 Once the slime was ready, I placed it on one of the classroom tables with large craft gems. The children happily stretched the slime and played with it for a while, adding gems along the way.  A few of our toy knights popped in, creating footprints in the slime.  The kiddos observed that the footprints “disappeared” and the gems sunk when left in the slime for a while.  Some fake flowers from a nearby sensory were added, as well. 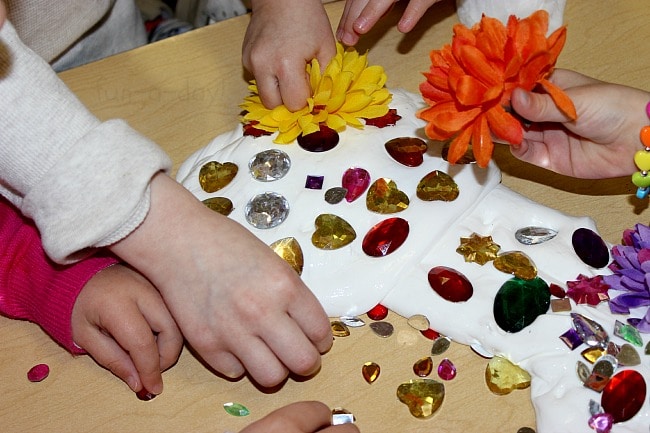 Then some of the royal slime meandered over to our nature/science center, where I’d set up an invitation to play and create with rocks.  The invitation included purple sand, which the children loved.  They desperately wanted to see what would happen if purple sand was sprinkled all over the white slime. 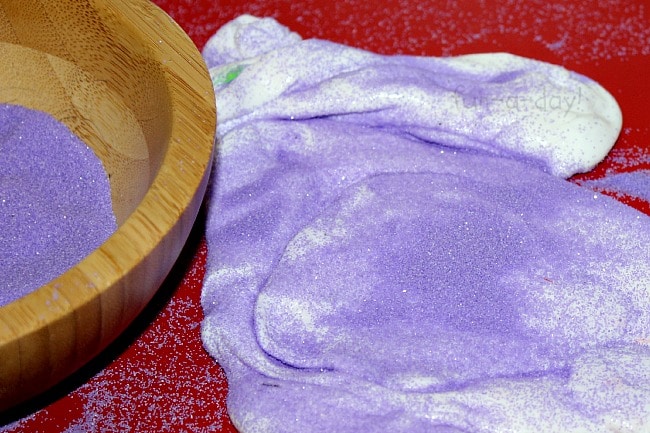 I’ll be honest – the urge to say “no!” came in at this point, but I managed to stifle it.  The kids weren’t hurting anything, we had more colored sand stored away for future use, and I really wanted to see where this was going!

The children broke off pieces of slime, rolled them in the sand, then placed them on a tray with rocks and fake flowers.  The entire time they did this, they chattered away about baking cakes and pies for the queen of the fairies.  Some children loved the imaginative play aspect.  Others were captivated by the texture and movement of the sparkly, sandy slime. 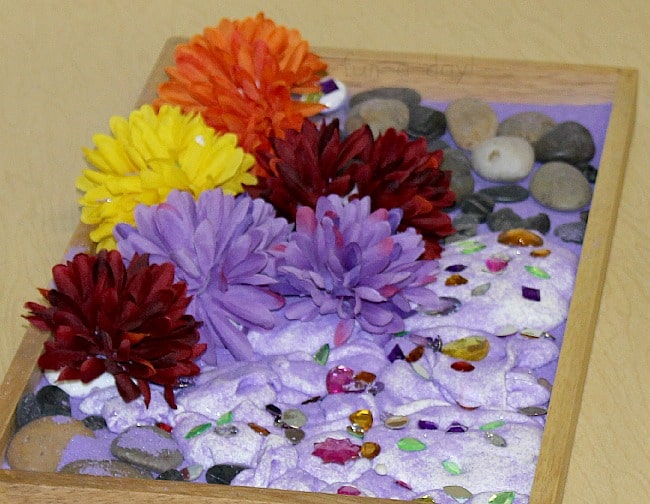 Once the slimy “baked goods” were done, the children went back to adding bling to the slime.  Craft gems were pressed into the sandy slime, as were glass gems.  Some  added gems just for the feel of it, while others created faces and patterns in the slime. 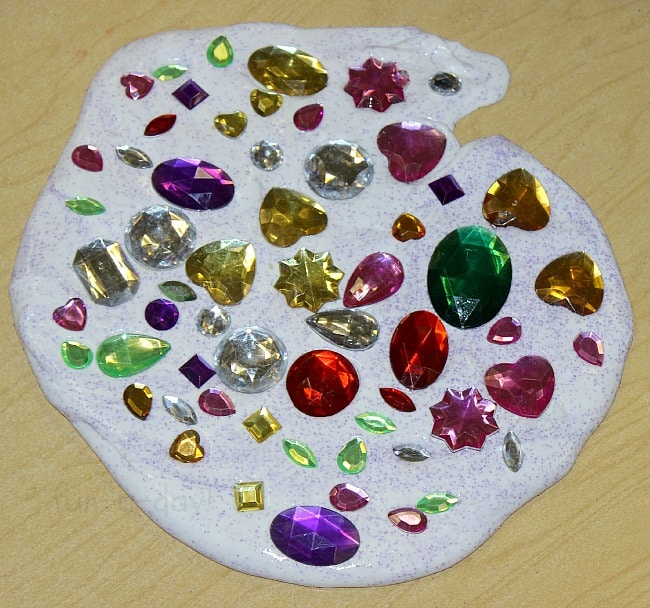 The toy knights, dragons, and fairies decided to visit with the sparkly princess slime after a while.  There was an elaborate royal wedding between the queen of the fairies and a prince, complete with outfits made out of slime.

At one point, the knights had to defend the slime from being taken by the “bad dragons”.  You’ll be happy to know that the “good dragons” were allowed to attend the wedding. 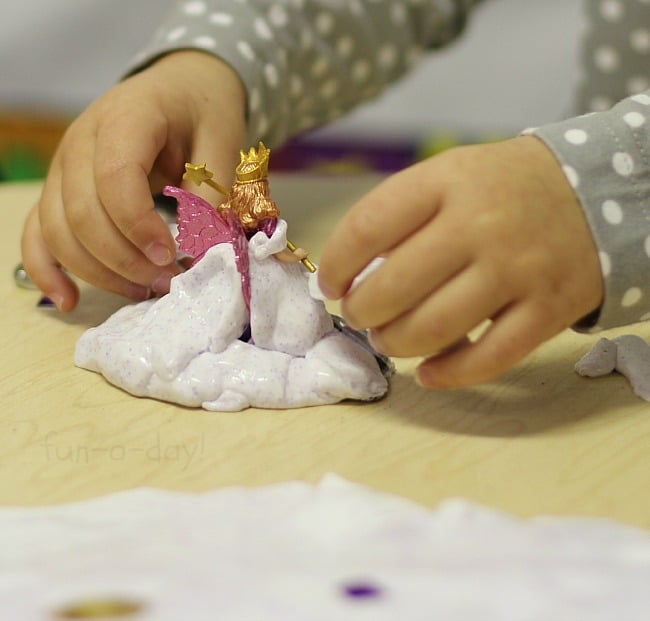 After the wedding, everyone began getting sleepy.  The children wrapped up the toys in blankets of slime and kissed them goodnight. 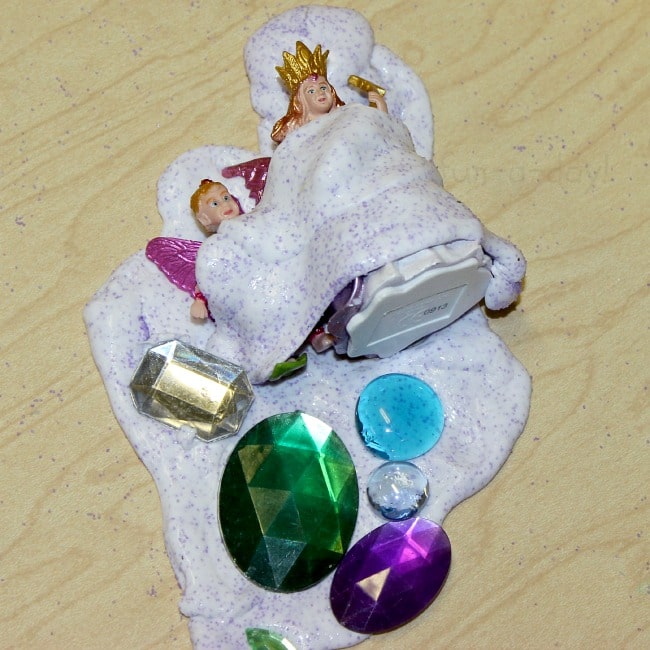 I think it’s pretty evident that my kiddos LOVED this preschool fairy tale slime!  They used it for over an hour each day for a few weeks.  There were days when every single one of my students was engaged with the slime at the same time.  They were so focused on creating with it, playing and feeling it, and telling stories with it.  At one point I told my director, “we could leave the room right now and they wouldn’t even notice it!” 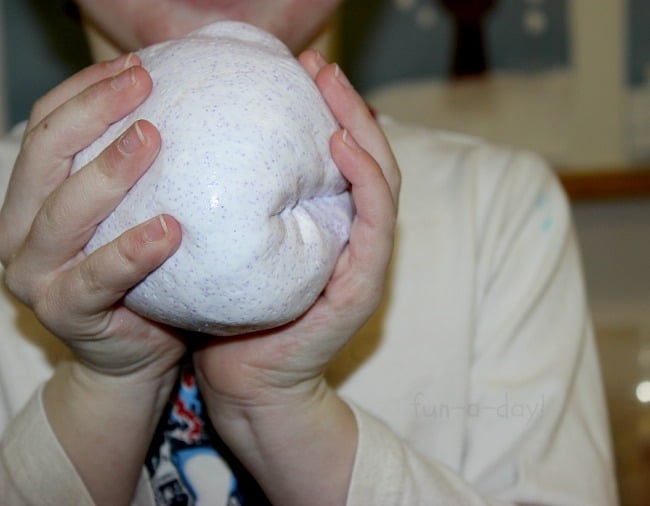 We kept it stored in an airtight plastic container when not in use.  We also added another batch of slime (this one was blue) to the mix after a few days. 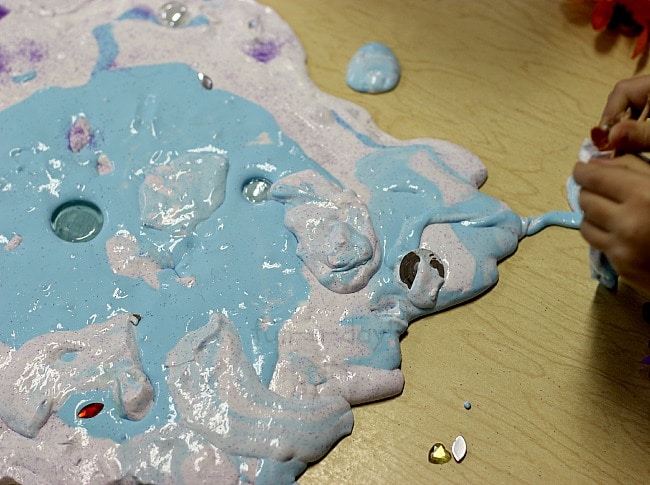 What kind of sensory activities have you incorporated into your preschool fairy tale theme?  Would you consider adding “sparkly queen princess slime” to the list?  🙂 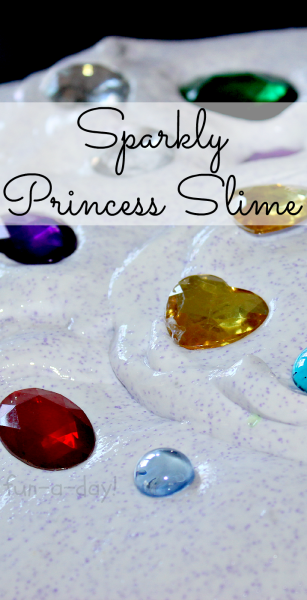