We use affiliate links and may earn commission from purchases made through those links.
Home / Early Learning / Sorting Magnetic Letters Helps Teach the Alphabet in a Fun, Easy Way

Sorting magnetic letters is an easy, hands-on way to teach the alphabet in preschool and kindergarten. Use free printable magnetic letter sorting mats for this early literacy activity (grab your copy at the end of this post).

One of my go-to early literacy supplies is a good set of magnetic letters.

There’s a never-ending list of how to use magnetic letters to teach the alphabet, words, names, and so forth.

Today I want to talk about just one simple method – sorting magnetic letters. 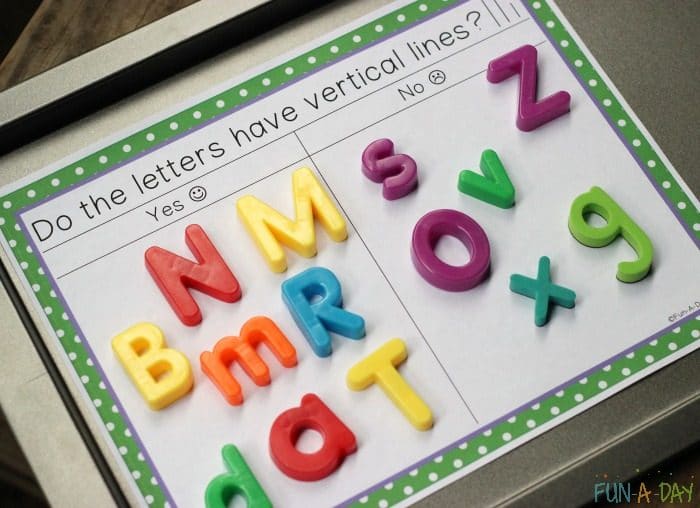 This post was originally published April 4, 2013. It’s been updated with a few new photos, more information, and printable sorting mats (as requested by some awesome readers).

What’s So Great About Magnetic Letters?

Even before the children start sorting, magnetic letters are teaching.

Kids use their senses to observe magnetic letters

To begin with, just the act of playing with and holding the magnetic letters helps teach a child. The letters will look different, whether by size, shape, color, or another defining characteristic.

On top of that, the letters will feel different in her hands.  The letter ‘x’ isn’t going to feel exactly the same as the letter ‘a’.  While she may not start out knowing what the letters are, her senses will be cataloging what she sees and feels. 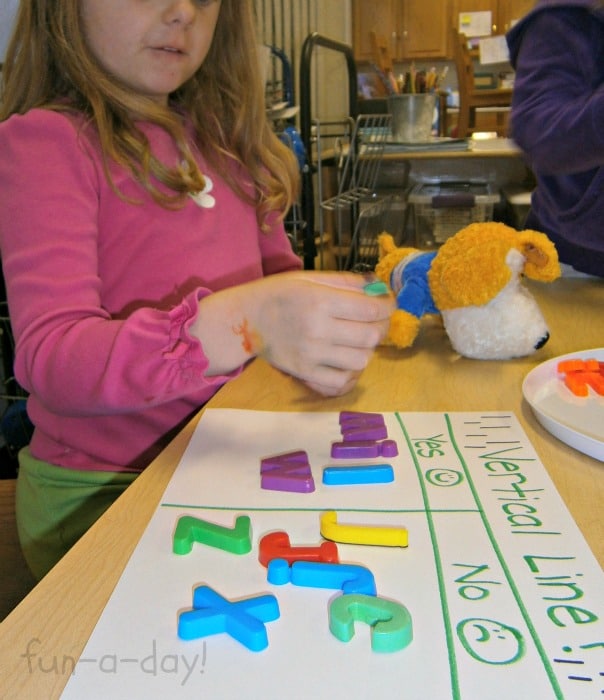 Plus, the child’s innate sense of curiosity will eventually come into play.  He’ll want to know what these things are that he’s playing with, so he’ll ask questions.

He will make connections, sometimes with an adult’s help of course.  For example, he might point out that one of the magnetic letters looks like a letter he’s seen in his name.  He might notice that one of the letters is on the stop sign he sees in his neighborhood every day.

Sorting magnetic letters might seem like just a math activity, but it’s so much more than that! In actuality, it’s an amazing, hands-on way to teach children about letters.

When a child is asked to sort magnetic letters, it forces her to attend to the similarities and differences within the letters.

This will make her take note that the letters are not all the same.  Even if she’s just focusing on the color of the letter, she will quickly learn that there are certain differences to be found. 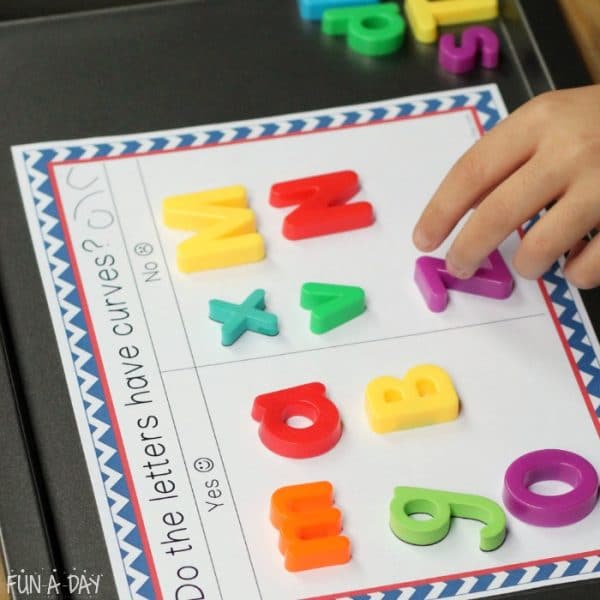 When looking at letters she’s grouped together in the same category, the child is likely to notice how the letters are the same color but different shapes.

Her mind becomes used to assessing and comparing what the magnetic letters look like.  This is a precursor for learning the individual letters and their distinct characteristics.

New language is learned during the sorting process

When a child sorts magnetic letters, his descriptive language improves.  His teacher (or parent) is giving him the language with which to describe letters.

Having the language to express the ways the letters are similar brings a new perspective to the process.  It allows him a way to verbalize the observations he’s making while sorting. 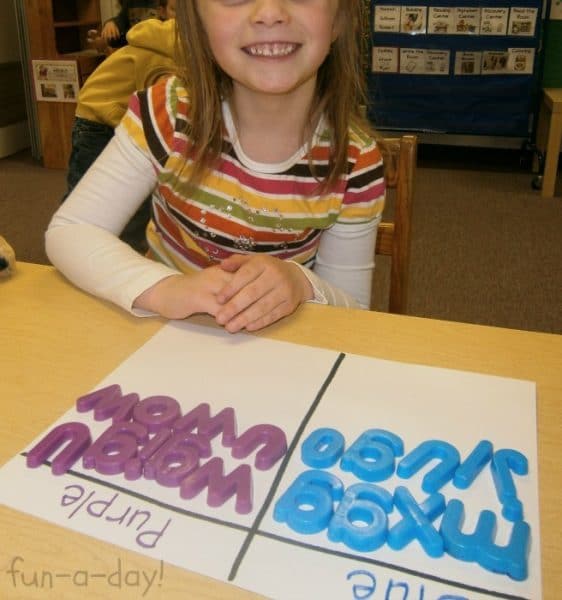 Keep in mind that sorting the letters can be done individually, in small groups, and as an entire class.  Children can sort on their own or with an adult there to help.  Asking questions and making comments as the children complete this task helps provide them with language.

It also helps draw their attention to the individual letters.  For example, you might make simple comments like, “I notice that the uppercase ‘E’ doesn’t have any holes, but the lowercase ‘e’ does.”

There’s a huge variety of ways for sorting magnetic letters

Below is a list of some ideas regarding how children can sort magnetic letters.  Please keep in mind that there are different levels of skill involved in the letter sorts. 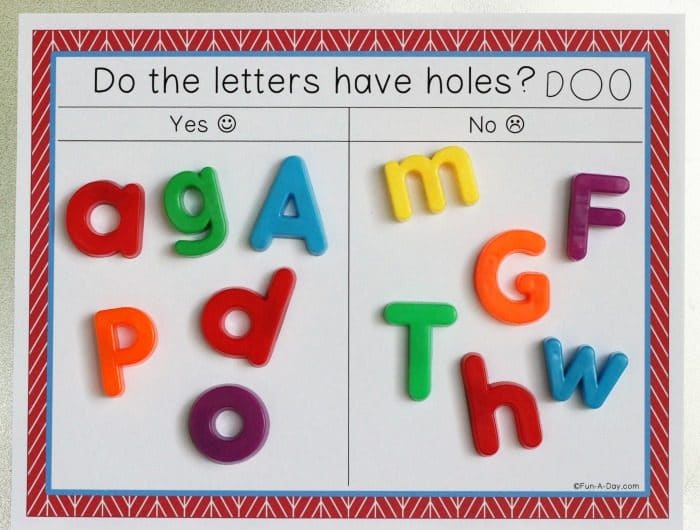 Choose ways of sorting that best meet the needs of the children you are working with.

Those are just some ways of sorting magnetic letters.  What are some other ways you sort them with your children?

As you can see from some of my older photos, you don’t need anything special to sort the letters.

I’ve often used construction paper that I’ve handwritten graphs on, and the children seriously don’t mind. Sometimes it was a quick graph I made on the whiteboard easel before circle time or center time. 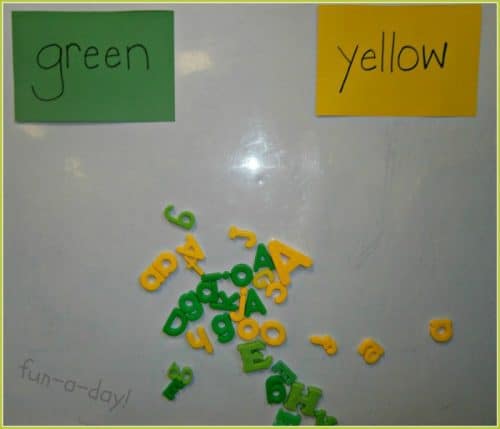 Of course, having a set of already-made magnetic letter sorting mats is just handy. It means they’re ready to be pulled out as needed, or you can store them in the literacy center so the kids can use them during independent time. For these, you can just laminate hand-drawn sorting mats or you can use printable sorting mats.

I’ve put together 5 free printable sorting mats you can grab at the end of this post. Print the sorting mats, laminate them, and use them with the kids tomorrow.

At the moment, I’m in the middle of putting together a giant pack of sorting mats. Once those are ready, I’ll share them here. 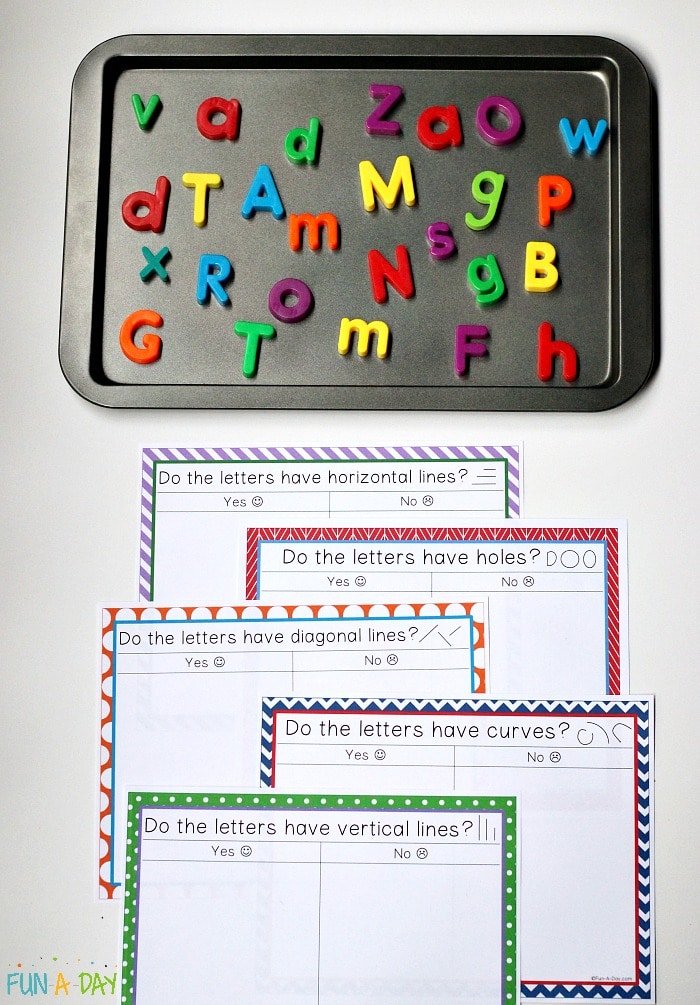 Ideas for Storing Your Magnetic Letters

I’ve been asked many times which magnetic letters I use and how I store them. There are so many choices out there, so go with what works best for you!

Over the years, I’ve kept a few sets of Lakeshore’s uppercase and lowercase magnetic letters in my stash. Learning Resource’s jumbo magnetic letters are also great if you’re leading a whole group lesson on a teacher easel.

In terms of storing the letters, I love this little hardware/craft bin. It’s been with me through multiple moves (one of which was cross-country) and many students. 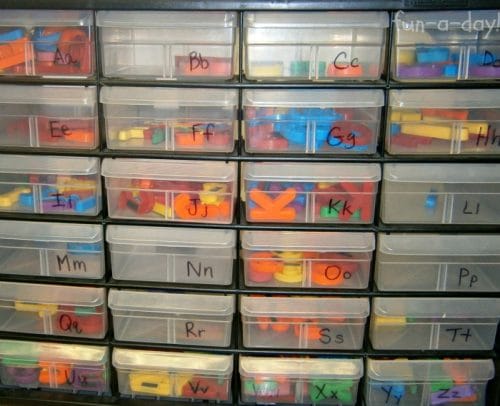 I also have something like this hardware organizer “briefcase” for when I’m traveling from room to room with the letters. This is also handy to keep things organized in a mobile literacy center.

We now have a HUGE (seriously, it’s over 300 pages) pack devoted to sorting magnetic letters. There are a variety of prompts in the form of full-page and half-page sorting mats, as well as printable prompts you can attach to your magnetic teacher easel during whole group learning.

You can also find us on Teachers Pay Teachers 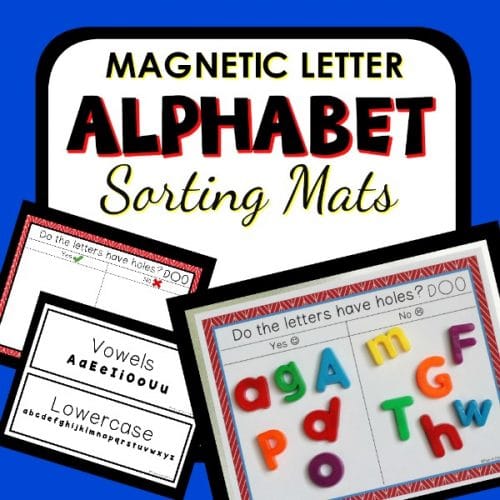 Save time planning for preschool with Preschool Teacher 101. You’ll find done-for-you lesson plans, math and STEM activities, and literacy ideas. Be sure to check out the membership options for even more savings. 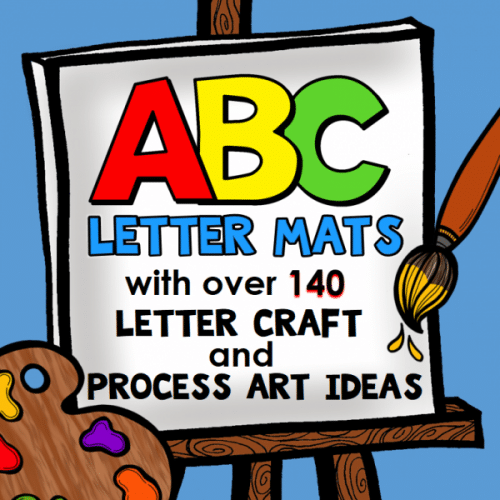 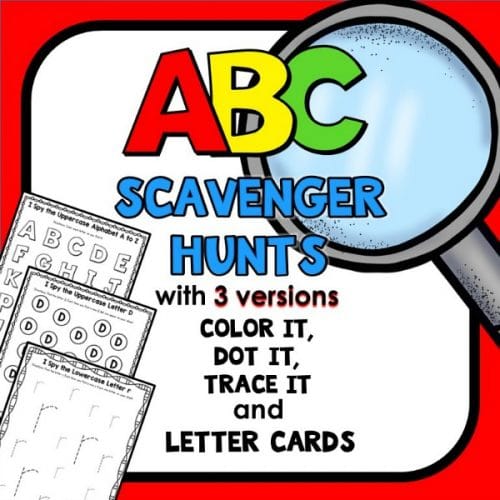 Even More Ideas for Learning with Magnetic Letters 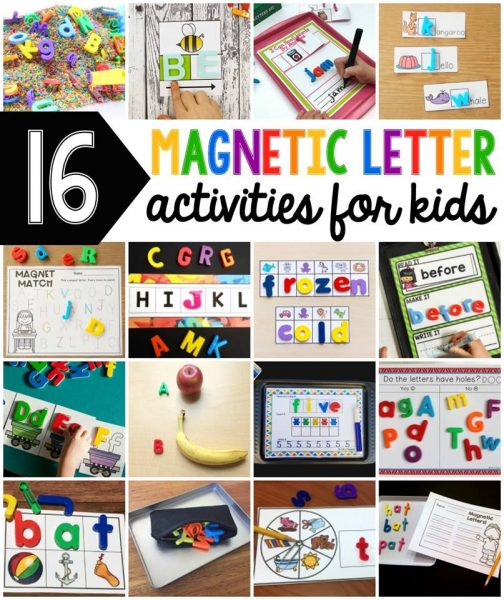 FROM LEFT TO RIGHT:

Magnetic Letters Center for All Year // The Simplified Classroom

Get Your Free Printable

The free printable sorting mats are available to members of Fun-A-Day’s free email community. If you’re already a member, click on the button below and enter your information to get the printable sent to your email inbox.

Not a member? No worries! Click on the button below and enter your information to join us. You’ll get the printable sent to your inbox as a welcome gift. If you can’t see the button, click on the highlighted text below instead.

If you can’t see the above button click here
Please note – many school districts have pop-up blockers enabled or very strict firewalls in place. If you’re on a school computer and can’t see the box that pops up asking for your email and name, this might be the case for your district. Using a non-school computer should solve that problem. 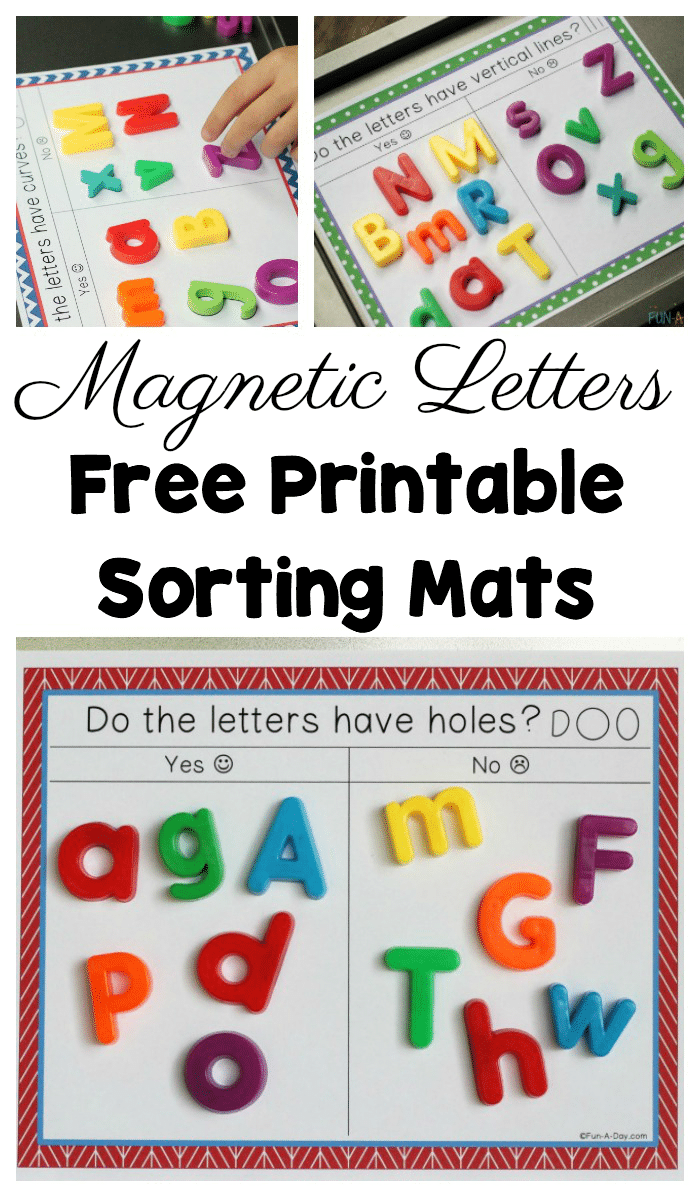