We use affiliate links and may earn commission from purchases made through those links.
Home / Early Learning / Math / Simple Outdoor Number Activities for Kids

Today, the preschool day started as usual. Since it’s almost the end of the school year, they really have their whole preschool schedule down pat. They hardly have to refer to our morning routine chart, as everything is now . . . well, routine for them! The kiddos put their things away, signed in, and got started on their morning choices. A few children were enamored with some number activities I’d set out on the table, and they dove right into them! 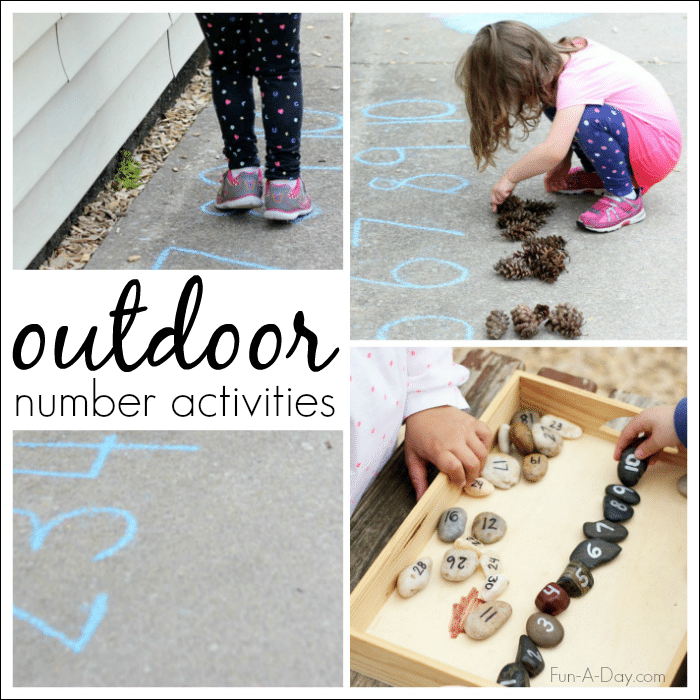 Easy Number Activities to Try Outside

This year we have our playground time pretty early in the day, so morning choices run right into our scheduled outside time. The math-fascinated kids weren’t too keen on stopping what they were doing, so I told them I’d set up more number fun for them outside. It doesn’t hurt to show the children that learning can take place anywhere and everywhere! 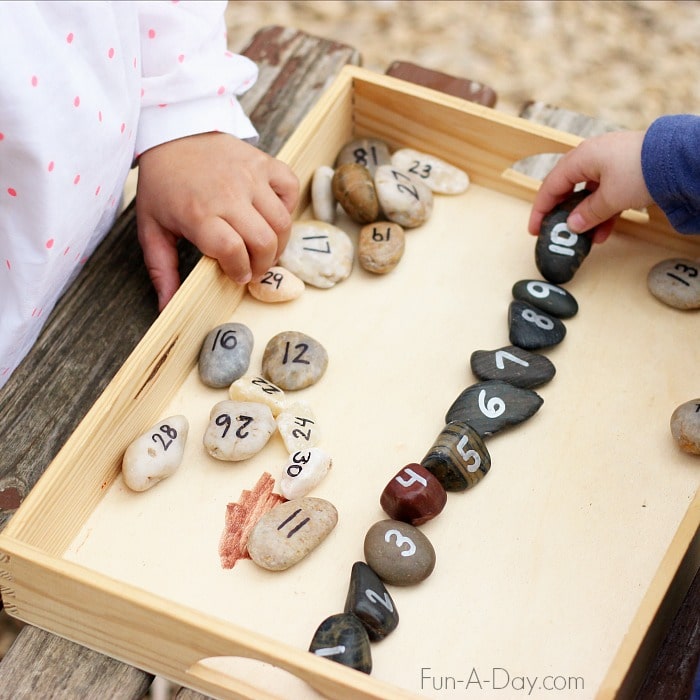 We brought the rocks outside on a wooden tray, and the kiddos explored. Most of the children wanted to put the numbers in order – some on their own, and some with a few buddies. The children manipulated the number rocks into order on the tray, as well as on a picnic table we have outside. I’m sure the kids can use them for many, many more number activities!

In prepping for the next activity, I wrote the numbers 1 to 10 on the sidewalk with chalk. Of course the kiddos wanted to know what I was doing, so a few popped over. They spent a while jumping from number to number as they counted forwards and backwards. I just let them go about this as they wanted to. It was wonderful to see them working together, encouraging each other, and challenging each other to do different movements (hop on one foot, hop on both feet, jump between numbers, etc.). 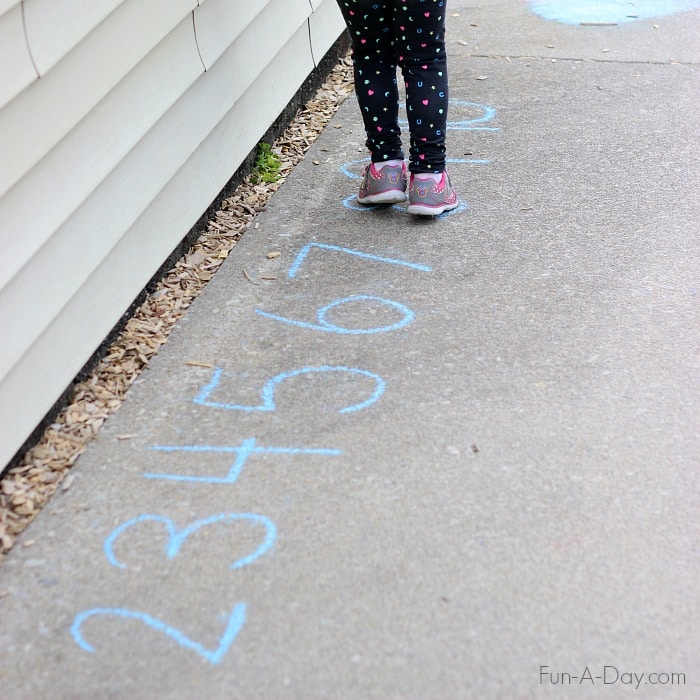 Once the children were done with their impromptu game of “number jump”, I brought out a bucket of pine cones. I challenged the kiddos to put the correct number of pine cones underneath each numeral I’d written. 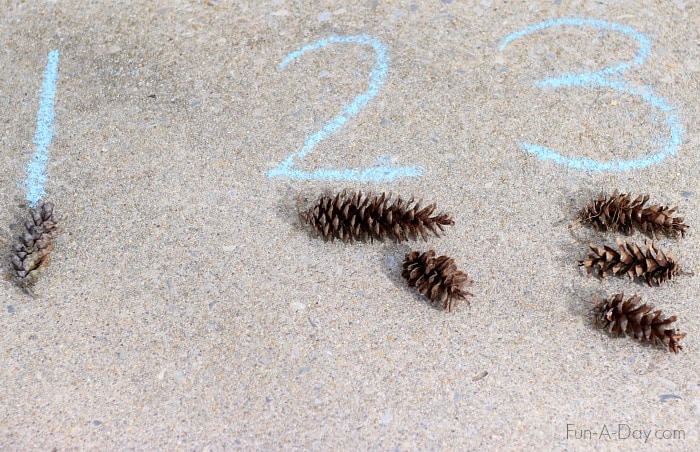 This was a wonderful way for the children to practice one-to-one correspondence and number recognition too. It was really interesting to see who had a full grasp of the concept and who needed a bit more help. I also loved watching how the kids approached it. Some really wanted to grab all of the pine cones at once for their numbers, while others went back and forth for each pine cone. 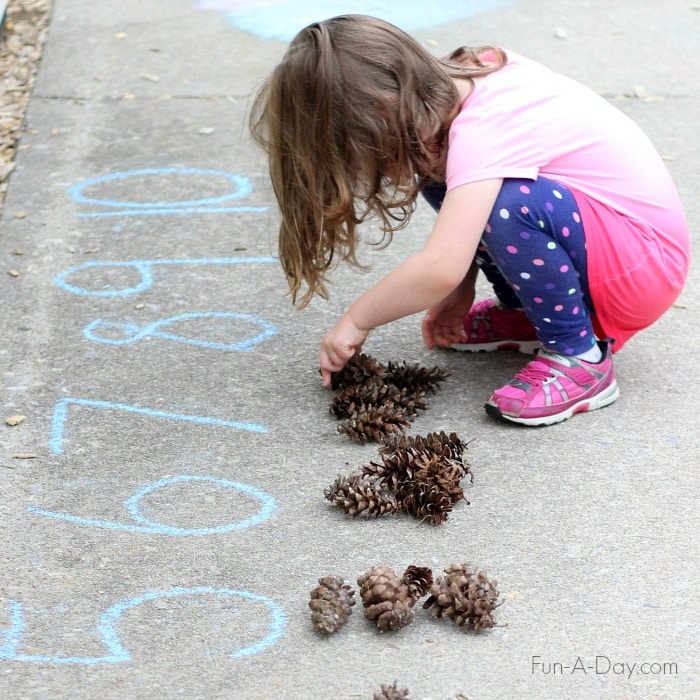 What number activities do your kiddos enjoy doing outside? Remember, children don’t need crazy complicated activities to learn and have fun! Simple is amazing, as is watching the kids create their own!

I absolutely adore this eBook. Yes, I’m a little biased since I worked together with other parents and teachers to create it. That doesn’t mean it isn’t amazing in its own right, of course! ABCs and 123s is full of 40+ kids’ hands-on activities for learning the alphabet and numbers. Each activity is kid-approved and geared towards children ages 2 to 8. Read more about the eBook now. 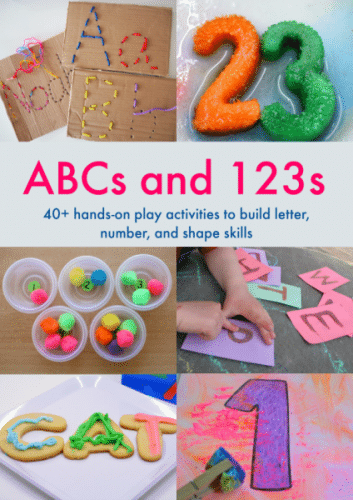 Engineering with mud bricks from Munchkins and Moms 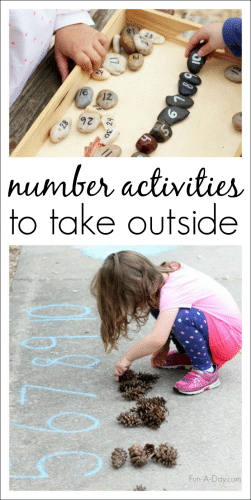