We use affiliate links and may earn commission from purchases made through those links.
Home / Early Learning / Sensory / Silver and Gold Glitter Sensory Bottles that Sparkle and Shine

These glitter sensory bottles were inspired by our silver and gold New Year slime. That slime continues to be a favorite around here, and the silver and gold tones are just gorgeous. The kiddo and I decided to take the glittery silver-gold goodness and make it into discovery bottles for the new year. Although, really, these sensory jars would be perfect any time of the year. 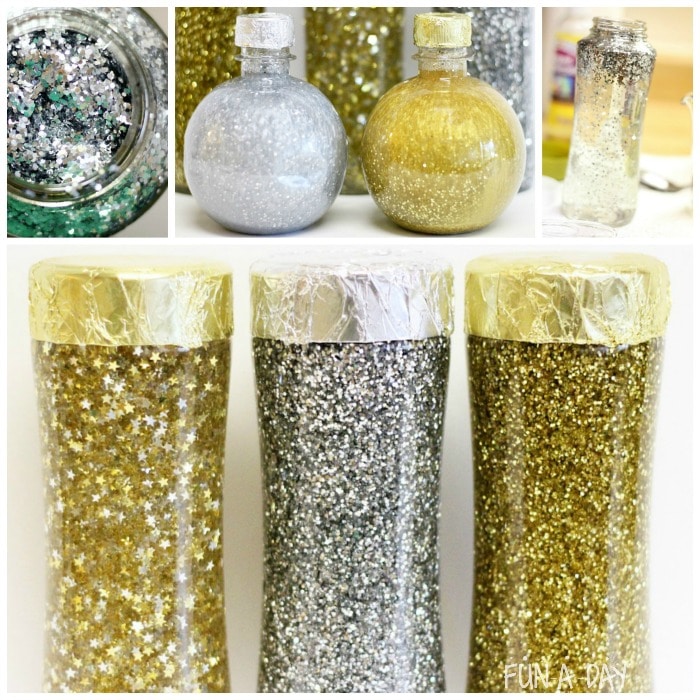 In case you were wondering, these are more than just a pretty face. Yes, the glitter sensory bottles are glittery and beautiful, but they also have even more redeeming aspects. Here are just a few: 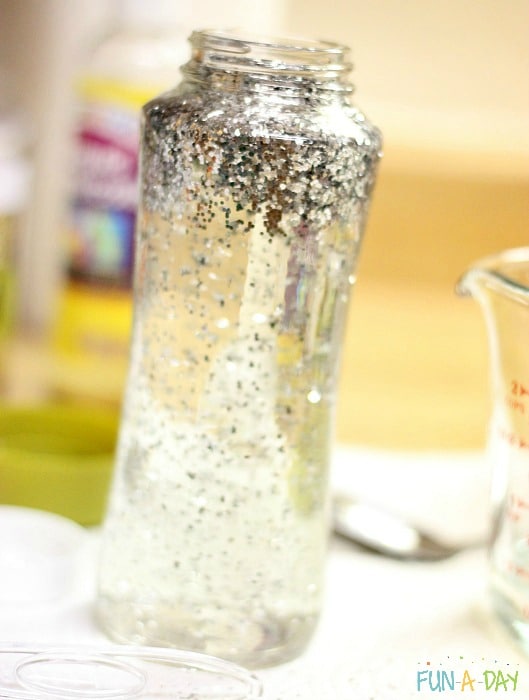 How to make silver and gold glitter sensory bottles

Grab some empty and clean bottles to start off with. We ended up using two different types of bottles this time around. The round plastic jars are leftover from a flavored water drink, but you can find empty round bottles for a few dollars each at your local craft store. The taller glass jars are leftover from a tea phase I went through for a while. Take care and only use glass bottles with children who will be appropriately gentle with them, of course. 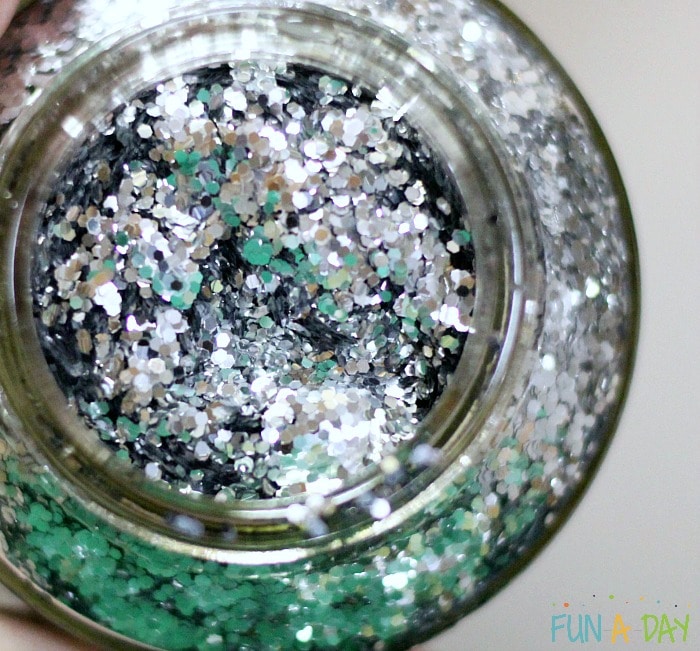 To make the round bottles, we added a bottle of clear glue directly into the bottle. Then we added a few squirts of metallic liquid watercolors (silver in one jar, gold in the other). Glitter was added, too, followed closely by warm water. We put the tops on the jars and gave them a very thorough shake. For the silver jar, I put tinfoil around the cap. I used gold candy wrap for the top of the golden bottle. 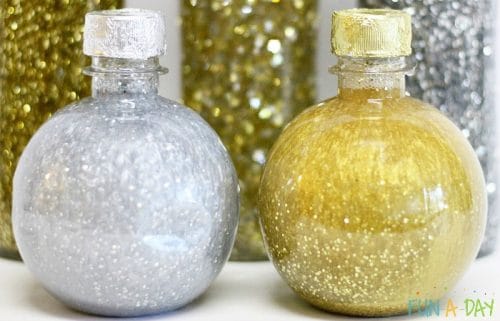 Next up were the tall, super glittery sensory jars. For these, I used my favorite “secret” ingredient – light corn syrup! I just love how it makes the glitter swirl and float around. The glass bottles hold about two cups of liquid, so I used one-and-a-half cups of corn syrup and about half a cup of hot water.

The trick is to mix the corn syrup and hot water together in a large measuring cup. When you first start mixing, the liquid will look a little cloudy. As they combine, the liquid goes back to looking clear. 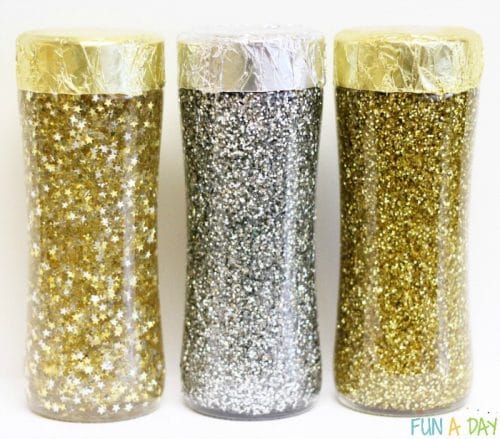 We added the corn syrup and water mixture to the empty bottles, followed by four tablespoons of glitter. One jar got silver glitter, one got gold glitter, and one got silver and gold stars. Then we screwed the tops on each bottle and gave them all a good shake. Like the round bottles, we put tin foil and gold candy wrap along the tops.

Have you every made glitter sensory bottles with the kiddos? We had a blast making these and playing with them. The round bottles made me think of the ball drop in New York City, but I have to admit the taller super glittery jars are my favorite. 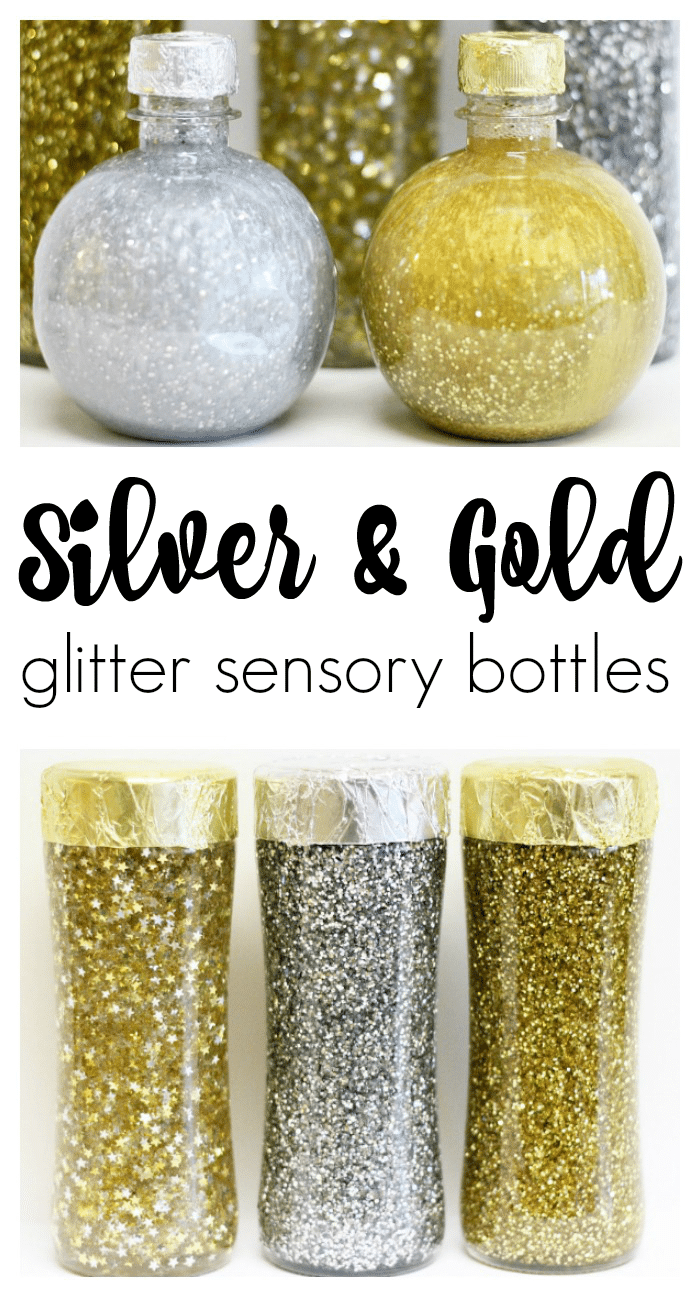