We use affiliate links and may earn commission from purchases made through those links.
Home / Early Learning / Science / The Smelly Pumpkin Experiment – A Lesson in Decomposition 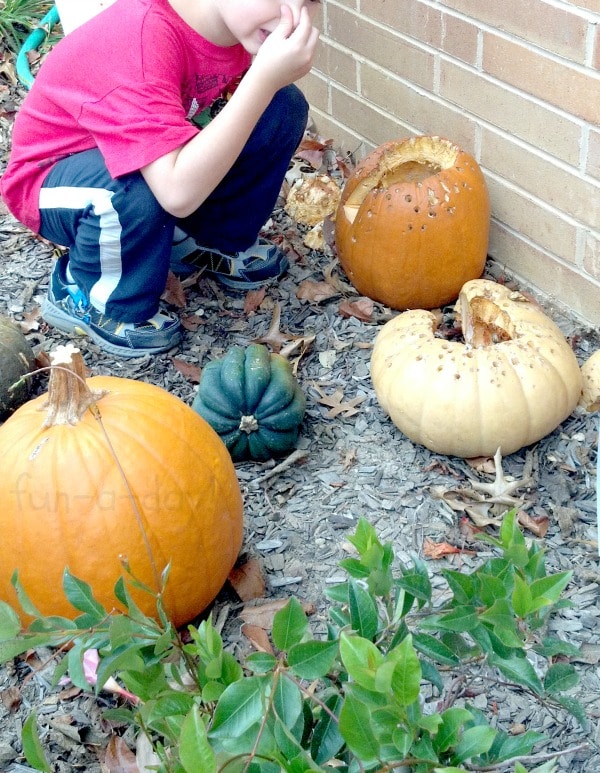 Last October, my preschool class and I embarked on an almost year-long pumpkin experiment!  If it weren’t for a freakishly rainy summer, I’m sure this experiment would have come to fruition.  But, like I tell the kiddos, experiments help us learn even if they don’t turn out like we planned.

Towards the end of October, my students had a blast with a sensory bin inspired by Exploring the Outdoor Classroom’s “Pumpkins and Golf Tees”.  Using mallets and hammers, they really got into pounding golf tees into a few pumpkins.  After about a week of this, the pumpkins became incredibly holey and ready for something different. 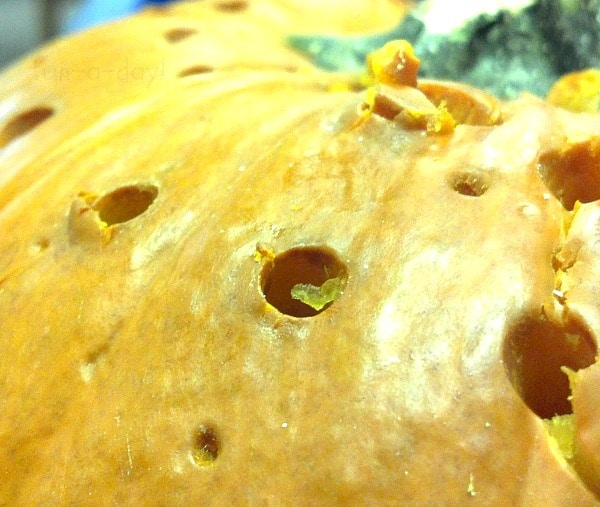 We took them outside, cutting apart the pumpkins and exploring the “guts” we found therein.  I loved seeing which children really got their hands into the seeds and stringy pumpkin insides (and which kids just didn’t like the sensation).  Some great commentary also ensued: 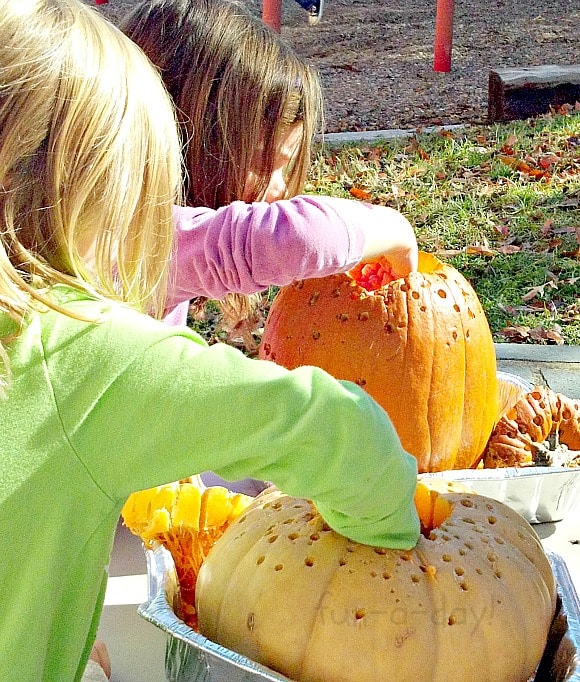 Once the pumpkins had been thoroughly gutted and explored, we decided to make some foaming pumpkins.  This was based on reading Growing a Jeweled Rose’s “Erupting Pumpkins”, and Steve Spangler has a different version with his “Oozing Pumpkins” experiment.  Whichever method you use will surely delight the kiddos. 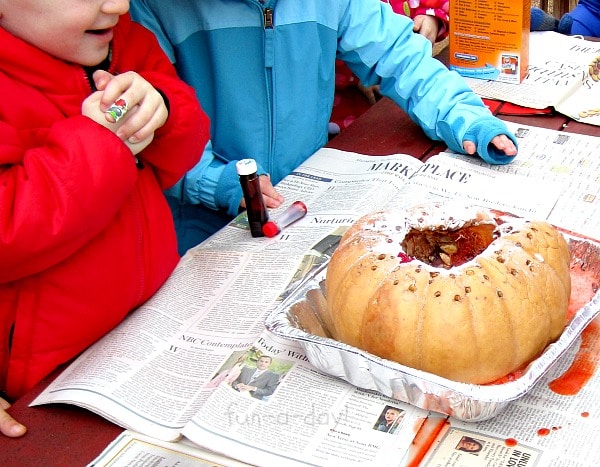 After the foaming pumpkins, the students made “pumpkin soup” for about an hour on the playground.  They added leaves, sticks, dirt, and twigs to the pumpkins.  There were stories bandied about during this play — all about the soup ingredients, what they needed next, and who was going to eat the soup. 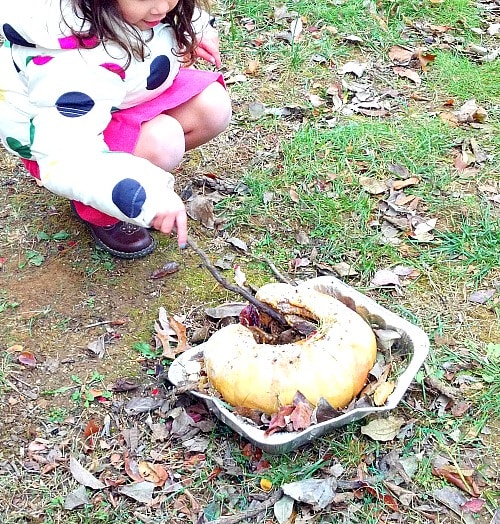 Once the children had thoroughly explored the remains of the pumpkins, we set up our smelly pumpkin experiment!  The children and I had talked about decomposition.  We talked about what it meant, and what was usually observed during the process.  In a patch of the garden near the playground, we placed the remains of our two pumpkins.  A few of the other teachers added to the experiment with an old jack-o-lantern, a whole pumpkin, and a small squash.  This was right after Halloween, during the first week of November.

Less than a week after we began, one of my students was really into checking out the pumpkins.  I told him he could get closer to see what was changing.  We got into a discussion about them, and I asked if he thought the smell of the pumpkins would change as they decomposed.  He looked at me like I was nuts, then said “no way!”  I told him to test it out, so he went up to sniff the pumpkins.  Boy, did he prove himself wrong!  He was rather excited about the smell, as only a young child could be. 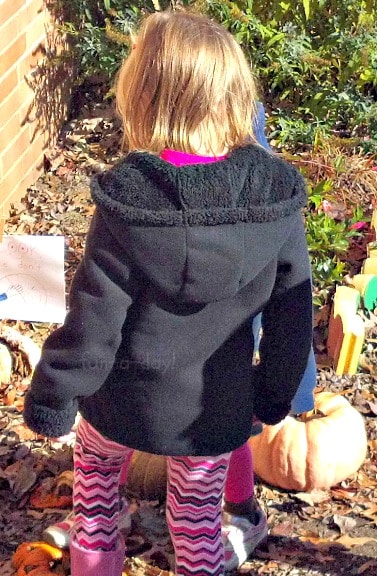 Throughout the rest of the school year, the kids would check on the pumpkins.  They’d comment on the smell, the shape, the colors, etc.  The “squishiness” was also discussed at length by the children, which I found rather amusing!  We were all SO excited when we noticed that the pumpkins had grown sprouts and leaves by the time we returned from Spring Break.  I was just as excited as they were, let me tell you! 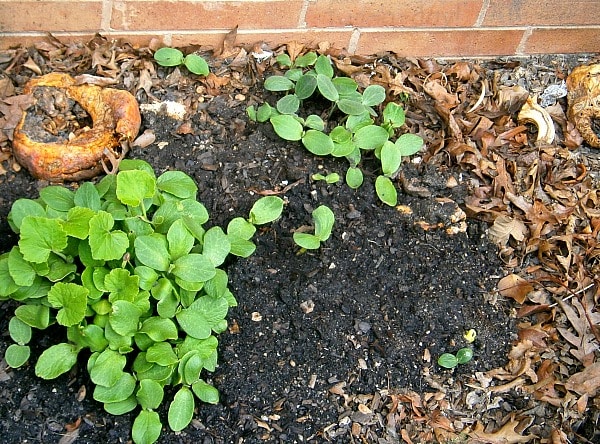 Since we had summer camps, many of the kids were able to see what happened to the experiment as the summer progressed.  We all loved seeing the leaves growing larger, and we were all amazed to see the pumpkin flowers sprout! 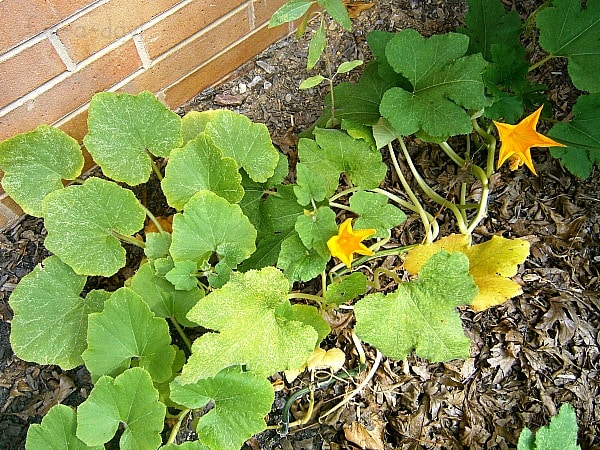 If we hadn’t had a crazy amount of rain over the summer, I bet we would have at least a pumpkin or two by now!  Unfortunately, the rain pretty much washed out the plants and ended our experiment.  Even so, the kids and I really enjoyed watching the life cycle of the pumpkin play out in real time!

Have you ever done a decomposing pumpkin experiment or grown pumpkins from seeds?  I’d love to hear about it if you did!

If you’re looking for more pumpkin-themed activities, I’d love for you to check out my Pumpkins Pinterest board!