We use affiliate links and may earn commission from purchases made through those links.
Home / Early Learning / Literacy / Simple Rhyming Anchor Chart for Preschool

Rhyming is an incredibly important reading readiness skill, and I incorporate a lot of it in preschool. One super simple way to introduce the concept is to create a rhyming anchor chart.

Are you following my Ultimate Guide to Teaching Reading Pinterest board? 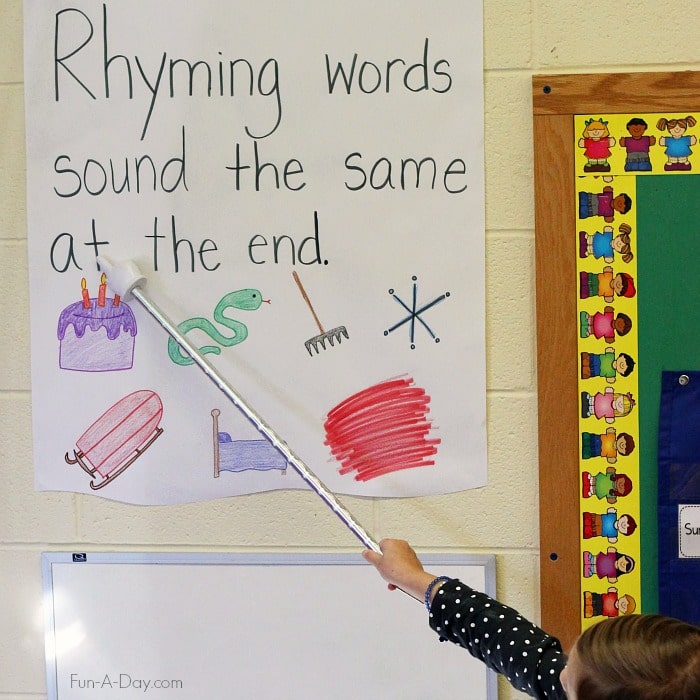 why a rhyming anchor chart?

Regular Fun-A-Day readers know I’ve taught both preschool and kindergarten. Additionally, I’ve worked with children from hugely different backgrounds, family lives, and socioeconomic statuses. Some children have come to me mostly proficient in rhyming, whereas others have entered my classroom with little or no exposure to the concept. This super simple anchor chart has been helpful for kiddos in each of these situations.

For those children who have almost mastered rhyming, this chart helps them internalize the concept. They may be able to create rhymes, but they’re not sure what rhyming really means. The chart’s explanation sets a good foundation for when the kids move to the printed word – when they can switch out beginning letters to make rhyming words and word families.

For those kiddos who’ve had little experience with rhyming, this is a great jumping off point. The explanation is simple and to the point. The examples help the children to begin exploring the concept.

This anchor chart is beyond simple. I used some white butcher paper since I need a new writing tablet. A few markers, some crayons, and that’s all I needed. I wrote “Rhyming words sound the same at the end.” — this is the perfect chance to work in some modeled writing! Once that was done, I added a few hand-drawn illustrations based on rhymes we’d discussed recently. The chart was tacked to the wall near our calendar, and that was that. 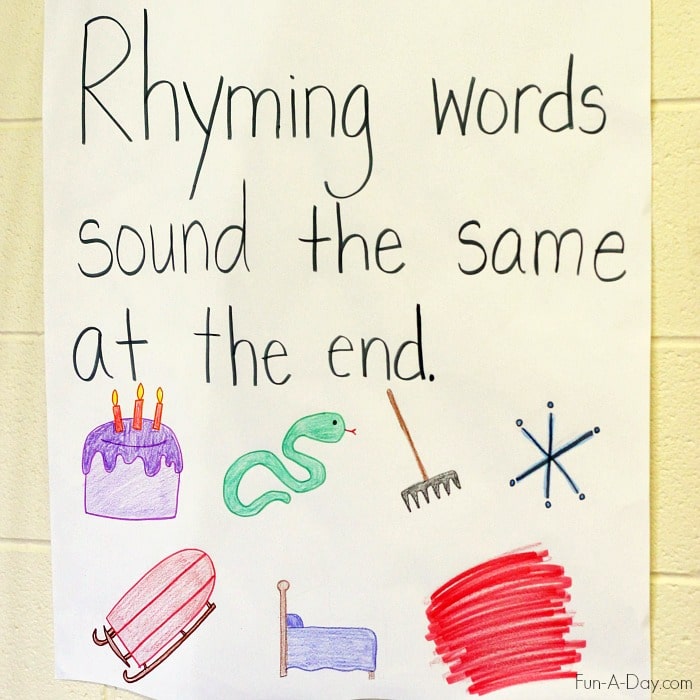 I usually like to let the children help illustrate charts like this, but I decided against it this time. The purpose of an anchor chart is to provide information to all of the kiddos. If everyone had drawn their own rhyming picture, not all the children would remember what each illustration meant. Of course, my drawings aren’t all that! 😉

I do intend to move the rhyming chart down closer to the kids’ level. Right now, this is the best spot for it so we can use it during circle time. It’s just a bit too high, though, in my opinion!

Once the rhyming anchor chart is up and ready to go, there are so many ways to use it. To start off with, read it aloud to the kiddos once it’s up. Grab a pointer and model how to read the chart – first the sentence, and then the rhyming sets in the illustrations. Read the chart each day, but don’t worry about spending a lot of time on it. It really shouldn’t take more than a couple of minutes!

Here are more ideas on how to use this easy rhyming resource:

What are some ways you would use this rhyming anchor chart with your students/children? For something so simple, it really has a ton of learning opportunities!

This post is part of The Ultimate Guide to Learning to Read, an emergent literacy series co-hosted with Still Playing School. Be sure to pop over there every so often. We’ll be updating it regularly! 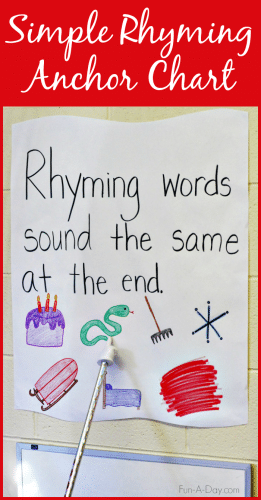