This free printable snowman game is a fun and engaging way for kids to learn about early math skills during a kindergarten or preschool snowman theme.

Creating a preschool theme around snowmen is always fun in the winter.

Couple that theme with the kids’ love of dice games, and you have this snowman math game.

Grab your own free printable snowman game and set it up for the kids. It’s perfect alongside a weekly snowman theme in the preschool or homeschool classroom.

Materials for the snowman math game

Print out the dice game – one copy per two kiddos. I tend to use these during center time, so I like to have four or five copies on-hand for the kids to play with. For durability, I’d suggest laminating the game board. If that’s not a concern, then skip that part.

You can use regular dice, or print out the ones that come with the game. One of the printable dice has the numerals 1 to 6 on it, while the other has the usual dice dots for the quantities 1 to 6.

Grab whatever the kids will use for the game pieces. We loved using the snowmen erasers (I found ours at Target, but Amazon has some alternatives) and large snowflake sequins. Other possibilities include bottle caps or coins.

How to play this printable snowman math game

This game is meant for two players.

Player 1 rolls the die or number cube, and then covers up the appropriate numeral on the snowman. Player 2 takers her turn and does the same.

Players go back and forth until all of the numbers are covered up. At that point, they count their pieces. Whoever covered up the most numbers is the winner.

When we play, if a player rolls a number that’s no longer on the board, they lose that turn. I tend to teach this in a funny way, exaggeratedly snapping my fingers and saying, “Maybe next time!” in a silly voice. This takes away the sting of not being able to cover up a number on that turn.

The game is easily played with just one person, too. Kids are often very happy to roll a die and cover up numbers all on their own. I’ve known kids to play the dice game on their own – sometimes over and over (and over!) again.

Other ways to play

Another way we like to use number games like this is with bingo dot markers, crayons, or markers. In that case, I print out extra copies of the game board. I don’t laminate them if we’re playing this way, of course.

When the kids play this way, each player chooses one color. They use that color dot marker (or crayon or regular marker) to color in each number as they’re playing.

Whoever has the most at the end of the game gets to take the paper home (for homeschooling families, whoever wins can put it up in their bedroom).

Would your kiddos enjoy this simple printable snowman game? If you play it, I’d love to hear what the children think. 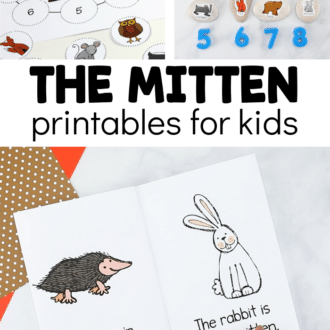