We use affiliate links and may earn commission from purchases made through those links.
Home / Early Learning / Art and Crafts / Name Ice Melting Science and Art Experiment

This was one of those activities that started out one way, then took off in a different direction! My son and I had a blast with a name ice melting idea that turned into an art and science experiment. 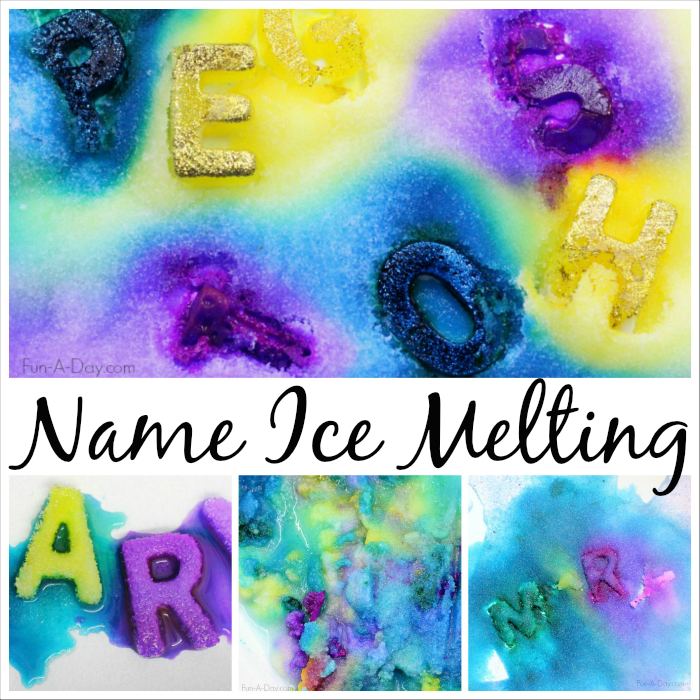 I asked Engineer if he had any ice-themed ideas he wanted to try for this week’s Early Childhood Education activity. We’ve been off school for a few days due to weather, so I wasn’t able to try one out with my preschoolers. He thought about it and decided something with names would be fun because he knows I’m teaching my preschoolers a lot of concepts with their names. His idea was originally name ice sculptures! 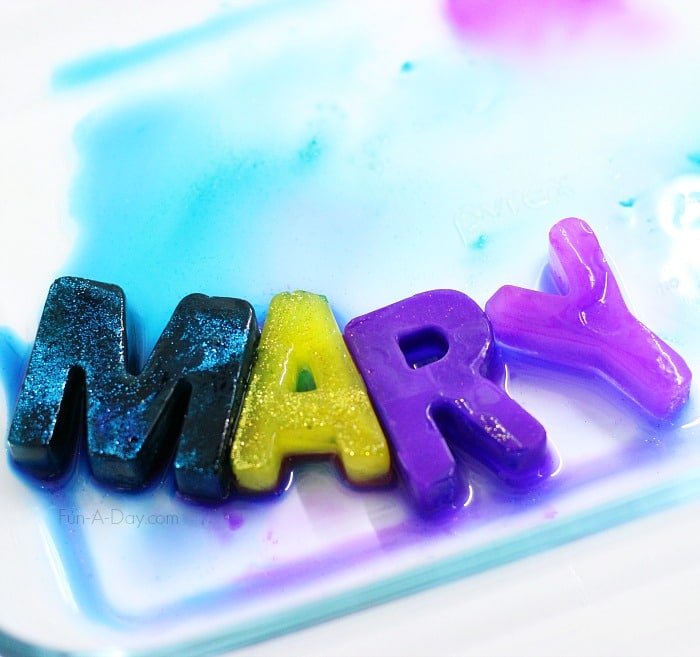 We grabbed our well-loved letter ice cube trays and started to fill them with water. That is, until Engineer spied the glitter liquid watercolors out on the kitchen counter. I knew we’d have some time off from school because of snow, so I brought my personal stash home from the classroom. Some people stock up on bread; I make sure we have enough art supplies. The kiddo suggested adding the glitter watercolors to the water so we could have some fun ice cube letters. We decided to use glittery purple, glittery yellow, and glittery turquoise. 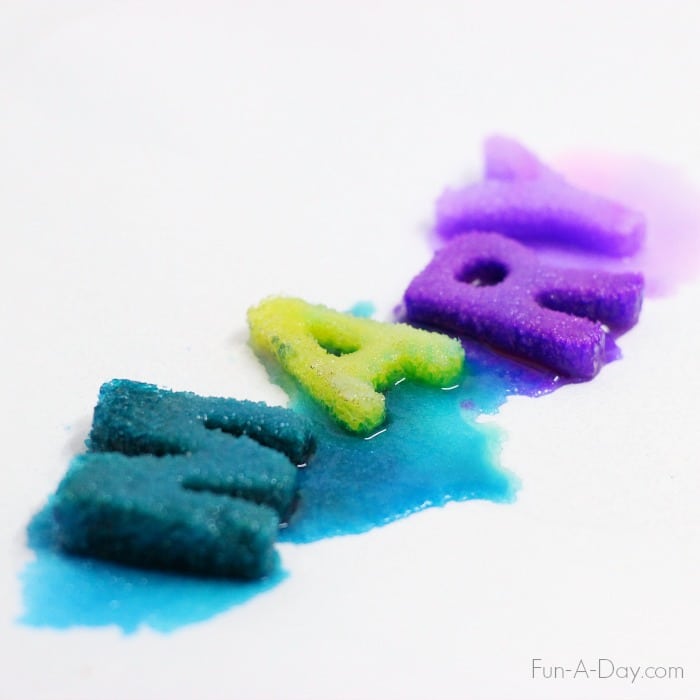 Once the icy letters were ready to go, we popped out some of the letters. We made a few names, deciding to start with mine. Once Engineer saw the colorful ice letters, he wanted to break out the salt. He loves exploring how ice melts, so we settled on that instead of name sculptures. Before we got started, Engineer shared some predictions about how long he thought it would take for the ice to melt once salt was poured on it. 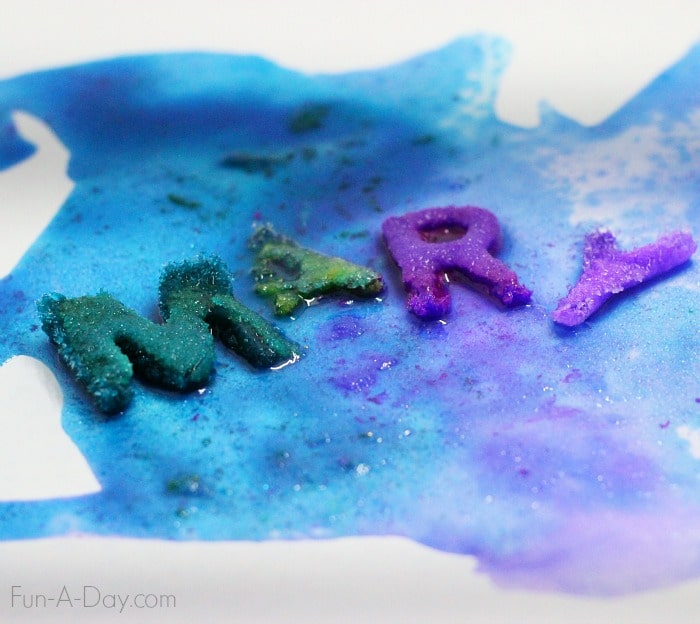 My name was placed on a tray, and then we sprinkled it with salt. Watching the colored ice melt was such fun! I commented that it looked like both an art and science experiment, so we added some white construction paper to the mix. Next time, we’re going to try this with sturdier watercolor paper, though. 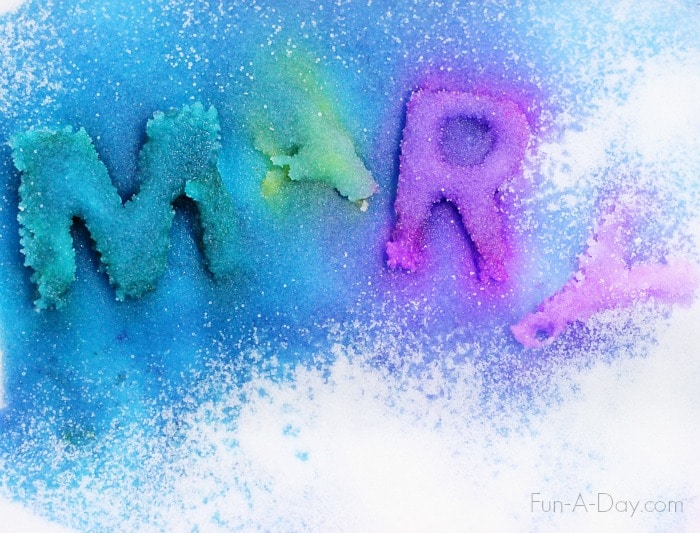 We had fun watching the salt eat away at the icy letters. Engineer, of course, decided to add more salt on top of the letters after a while. We didn’t treat this as a truly scientific experiment obviously – otherwise we would have been a bit more precise in measuring and keeping track of the salt we used. We left my name on the tray, covered with salt. 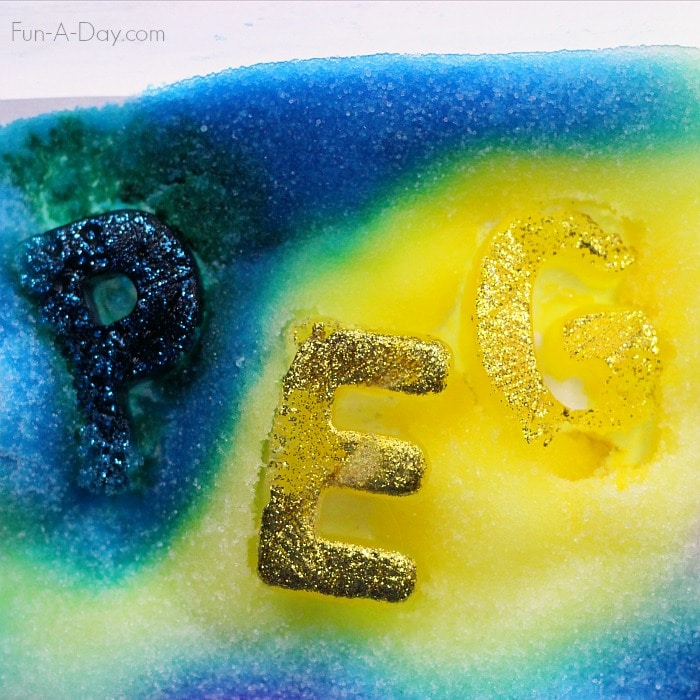 While waiting for my name to melt, the kiddo and I decided to see if it would be different if the salt was underneath the letters. We discussed a few possible end results, then decided to set everything up. We put more construction paper into another tray. Salt was added to the tray, followed by another name (hi, Peg!) and extraneous letters. 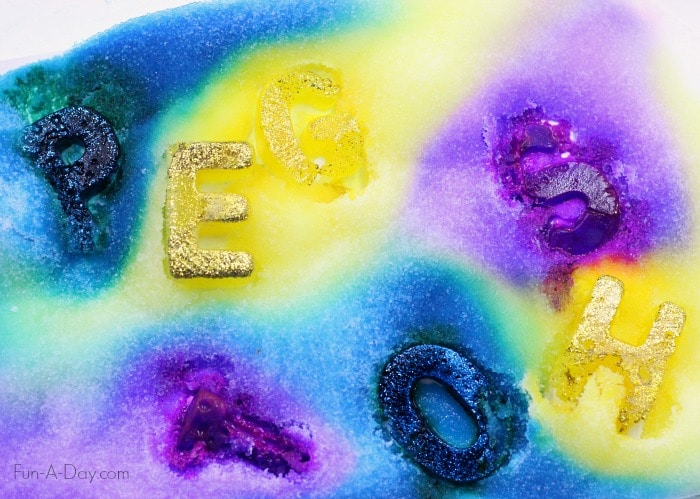 While the first experimental set up fascinated us because of the salt eating away at the ice, the second experiment grabbed our attention for a different reason. Once we added a thicker layer of salt, we loved watching the watercolors as they were absorbed by the salt. Just beautiful! 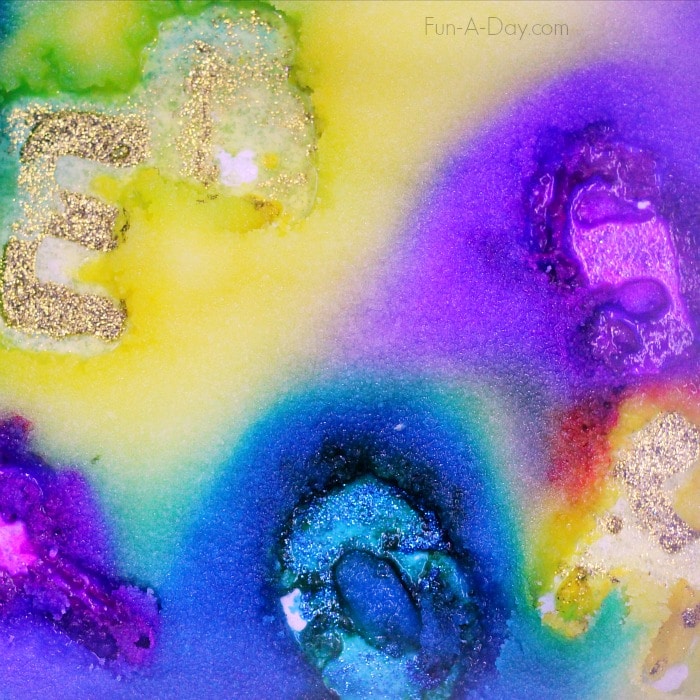 In the end, we were both off in terms of how long it took the icy names to melt. We loved keeping track of the ice melting process, as well as observing how the watercolors added a new dimension. One of the things that entertained us the most was that the glitter stayed in the letter shape once the ice was melted! That is, until we stuck our fingers into the colorful salt and mixed everything up! 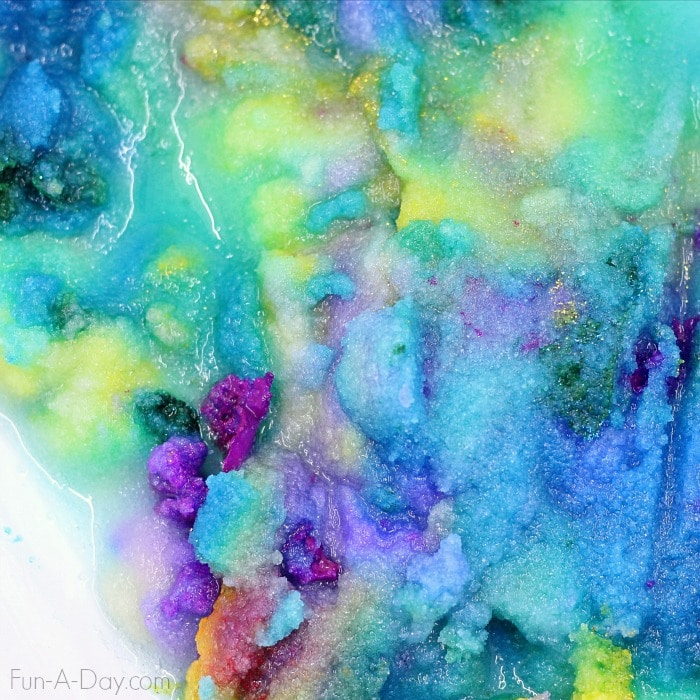 We came away from this ice melting science and art project with a few pretty pieces of art, a ton of smiles, and some beautiful pictures. I am positive we’ll be trying this again, and I know my preschool kiddos will get a kick out of it!

For more ice-themed activities, please see what the rest of the #TeachECE group is up to: