We use affiliate links and may earn commission from purchases made through those links.
Home / Early Learning / Legoland California Review from a 7-Year Old & His Mama

Engineer has loved playing and building with Legos for most of his life, so Legos are a staple at my house!  Needless to say, he was beyond excited to visit Legoland on a recent trip we took to San Diego, California. Just so you know, we received two free one-day resort hopper tickets.  My Legoland California review is 100% honest, though – the free tickets didn’t sway my thoughts (or Engineer’s sentiments). 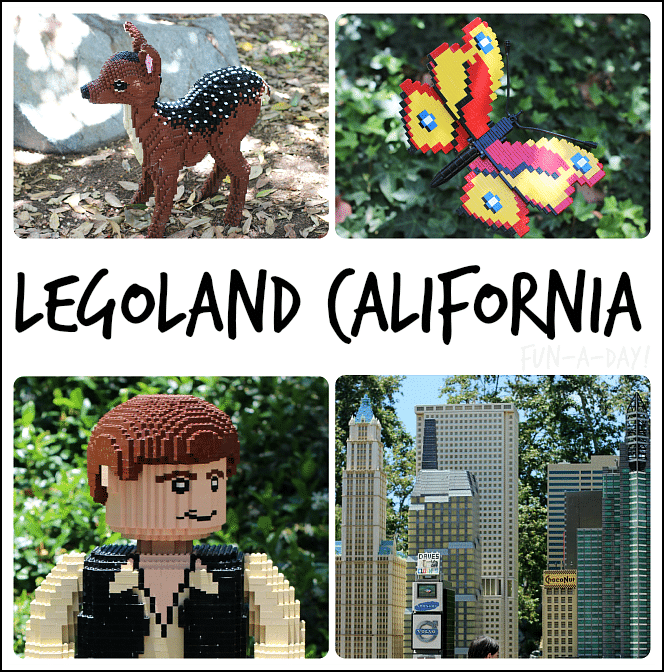 Without further ado, our 10 favorite activities, in no particular order:

Imagination Stations
I honestly believe Engineer could have spent hours at these stations.  He loves designing and building with Legos (obviously), so those little challenges were a hit.  His favorite, by far, was building a ship and testing it out in a mini river set up.

Mini Land
Oh my word, the creations of Mini Land were amazing! When I was looking into Legoland before we went, I’d heard as much.  It is so much more awesome in person! 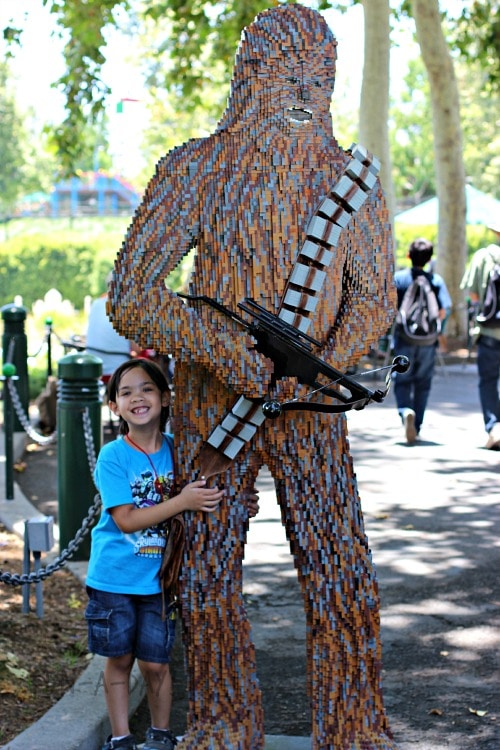 Engineer, of course, loved anything related to Lego Star Wars.  He asked to take a picture with every one of the characters lining the path to the Star Wars section.  “Looking at the Legos was good.  I liked the Star Wars one when Anakin and Obi-Wan were fighting because it moved.” 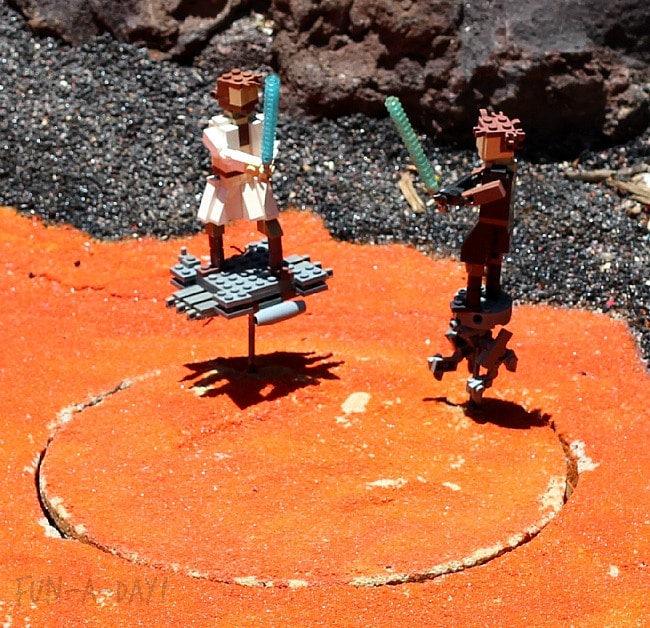 I think my favorite was New York, mainly because I loved watching Engineer walk through it and inspect every facet.  Mount Rushmore was cool, too — from afar, it didn’t look like it could be made from Legos.  Sure enough, as soon as we were close enough, the Lego construction was apparent. 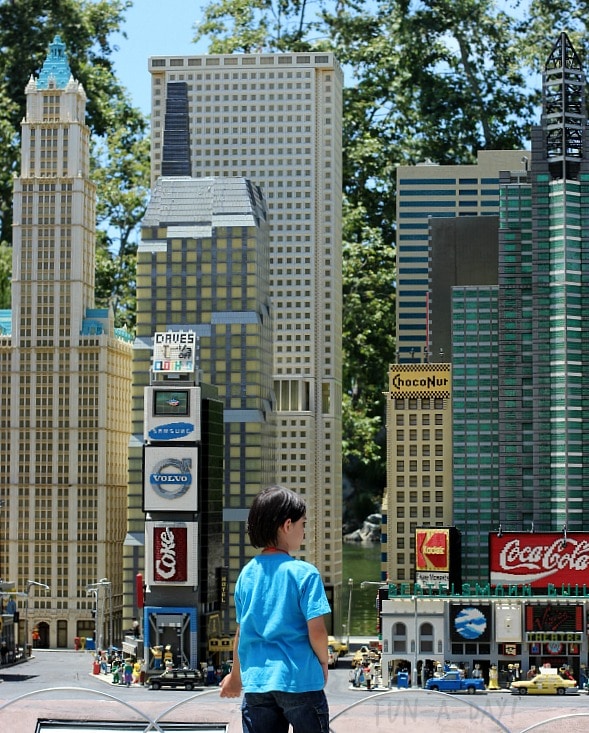 The Dragon
“Mom, was that your favorite at Legoland?  ‘Cause I know dragons are your favorite!”  Engineer was so excited that I got to ride on a dragon roller coaster.  It was fun for all of us, but I loved it because of that excitement.  My best friend Beth got Engineer a special souvenir from this ride – a picture of us on the ride, but done in Legos!  “The Lego picture is pretty cool-looking!”  He’s taken it apart and rebuilt it so many times since we got home.

Bumper Boats
This was a fun ride for the kiddo, especially since he was able to drive the boat himself.  The little Lego structures along the way were entertaining, and he got a kick out of “the guy in the bathtub because he was naked!”  Ah, the sense of humor of a 7-year old. 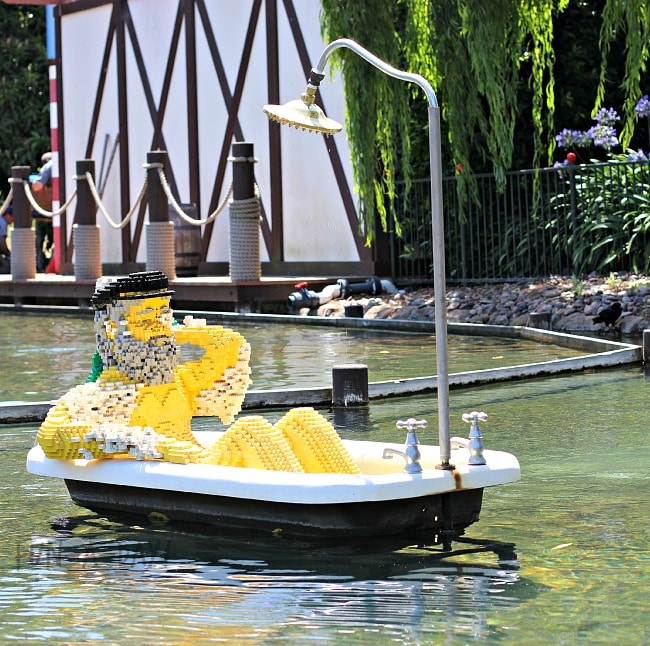 The water structures around the Lego Chima Water Park looked like a blast for the kiddos!  Engineer certainly giggled up a storm as he splashed and played with the other children. His favorite was when a ton of water was dropped on the kids as they played.

Water Park Slides
I loved the biggest slide at the Legoland water park (called Orange Rush), as we all got to go down together.  My friend, the kiddo, and I piled into a round raft and rode to the bottom of the slide. “Yes, that was cool because we all went on it together.  But it wasn’t my favorite.  I liked the blue one because it had a stop light that told you when you could go.”  Engineer could have spent hours on these water slides! 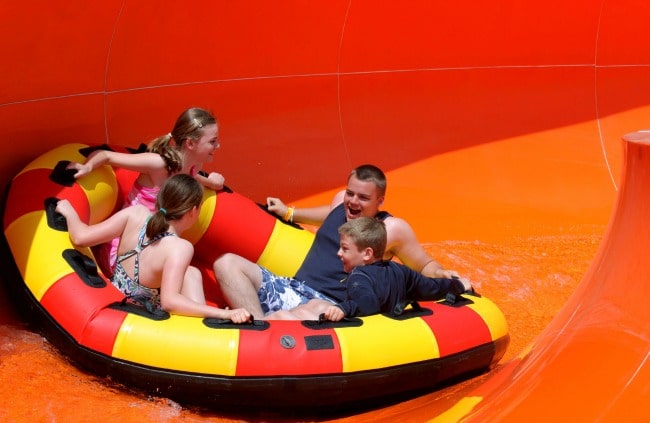 Water Park Build-a-Raft River
This lazy river was oh so relaxing on a beautiful day!  We cruised down the river, enjoying the sunshine and laughing at Engineer’s silly jokes.  I loved how they had tubes for everyone – double tube rafts for parents with smaller kids, single tubes with Lego building block attachments, even tubes without holes in the middle for the littlest kiddos.

Pirate Reef
This is definitely a super wet ride!  Before we got on, we took our shoes off and set our backpacks to the side.  Thankfully, the employees had a place for everything. As Engineer said, “we got so soaking wet!” If you have a resort hopper ticket, I’d suggest going on this ride from the water park side.  This way, you’re already in your swimsuits!  We were in our regular clothes, but thank goodness they had “people dryers” we could stand in and take the edge of the wetness off (there was a small charge). 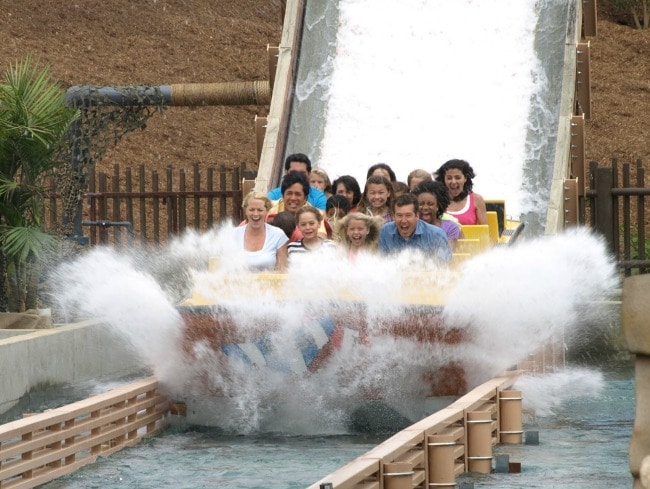 Apple Fries
If you need a snack, you really need to try these out.  Apparently, they’re Legoland’s signature snack, having been created there.  So delicious!

Minifigure Trading
Engineer thought it was so fun to trade minifigures with some of the employees of Legoland!  “I got to trade the Lego people with them, and it was so cool!  I took one home that I never had before!” 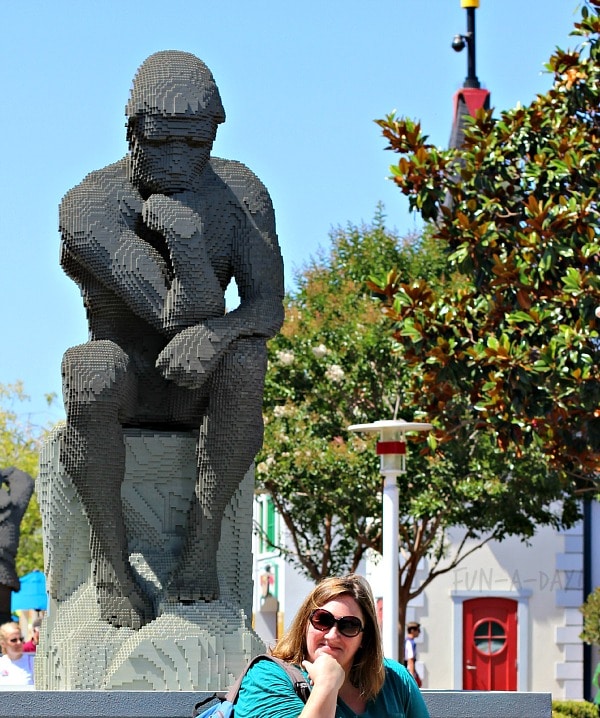 I also loved all of the little touches around the park.  “The Thinker” statue, the butterflies, and the Lego factory “tour” . . . all of them made out of Legos, of course.  And the bathroom signs made me giggle every time we passed one! 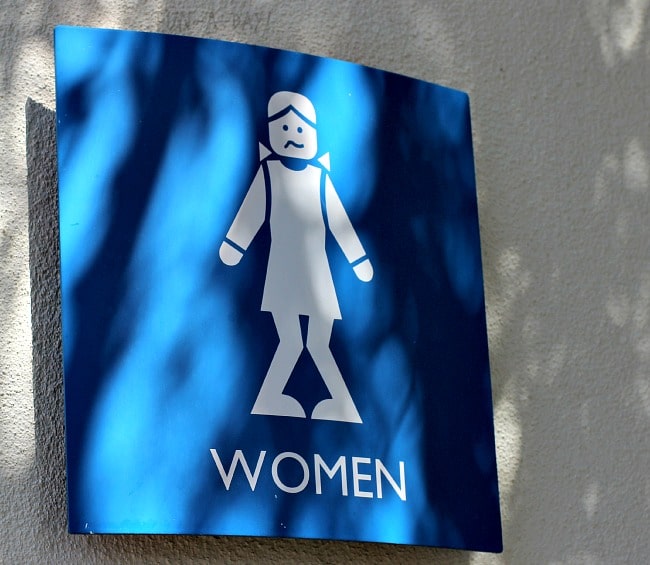 “I thought that it would actually be awesome and it was!  But I still want to go back and do more and stay in the Lego hotel!”  Basically, there just wasn’t enough time in one day to see and do everything!  I think 2 or 3 days would be even more fun for the kiddo and I.  Engineer’s already talking about saving up to stay at the hotel nearby too!  Have you ever been?  Would your kiddos enjoy Legoland?

For more information, check out Legoland California’s official site.  They often have deals on tickets, so keep an eye out.  If you’re looking for another Legoland California review — Tips for Family Trips shares 10 tips for visiting, and The Mommy Files shares her top 10 things to do while there.

For Lego activities to try with the kiddos, be sure to visit my Lego Activities Galore Pinterest board!