We use affiliate links and may earn commission from purchases made through those links.
Home / Early Learning / Sensory / Cool Whip Sensory Activities for Toddlers

Recently, I have come up with some new fun for Determined Diva (age 1) and Little Hurricane (age 2)!  Specifically, I wanted to create a few taste-safe sensory activities for toddlers.  The Diva is at the stage where almost everything goes into her mouth, and Hurricane’s first reaction to most sensory activities is, “I eat it?”  The first thing I came up with was using whipped cream or whipped topping.  I’ve used shaving cream with kids for over 10 years, and I’ve always like whipped cream as an alternative for the little ones. 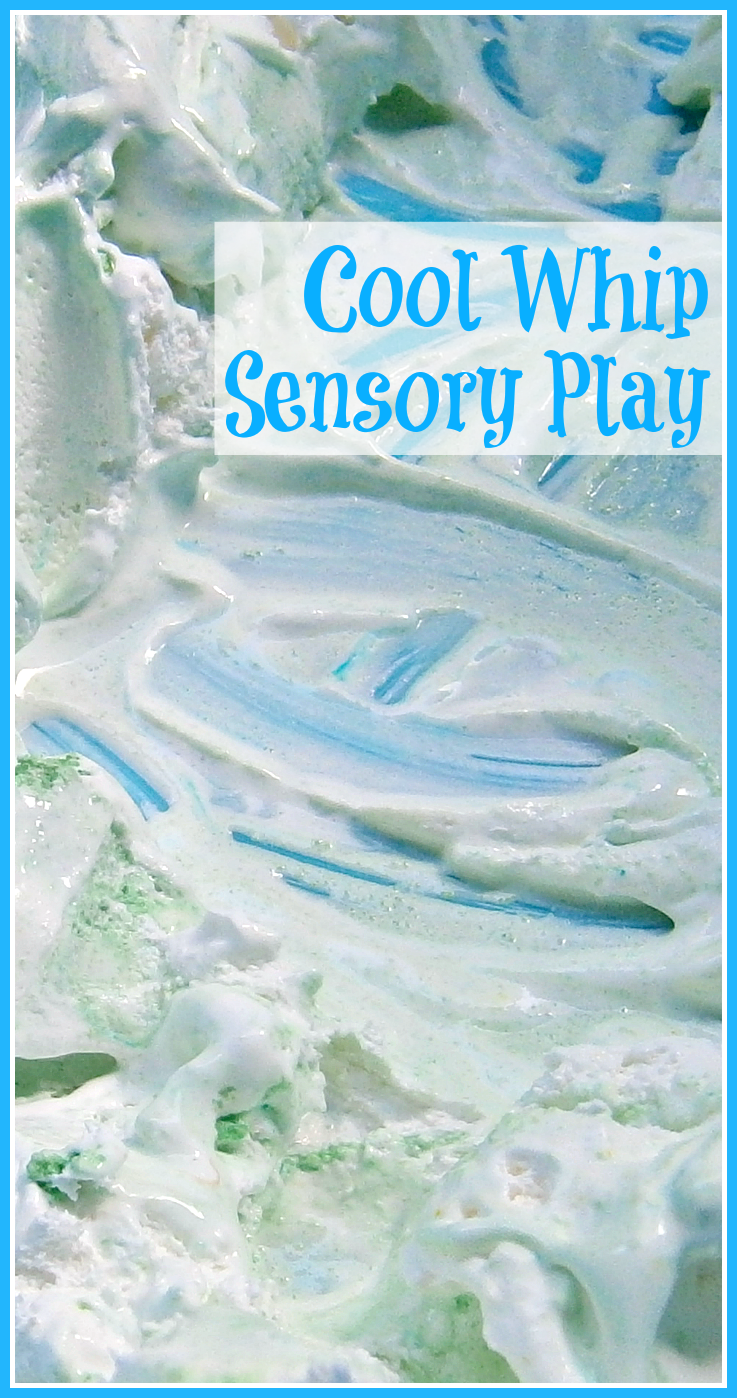 2 sensory activities for toddlers that use cool whip!

We used this one ingredient for two different edible toddler sensory activities!  For our first play time, I simple put a tub of Cool Whip in the water table.  Since Diva was wearing a pretty dress, I made sure to cover her up with one of Engineer’s old shirts.  Sure enough, she dived right into the fun!  Diva and Hurricane used spoons and potato mashers in the Cool Whip, as well as their fingers.  They looked, touched, tasted, and smelled as they played!  I added a touch of lime Jell-O powder to the whipped topping to heighten the scent, and I’m sure it changed the taste a little bit.  Either way, both the kids took a few tastes, so I’m glad it wasn’t shaving cream!  🙂

After about half an hour, Little Hurricane asked that water be added to the Cool Whip.  I was happy to oblige, especially since I knew it would extend the kiddos’ play times.  The water changed the texture of the sensory play, and it also added a different sound aspect (with the splashing and pouring). 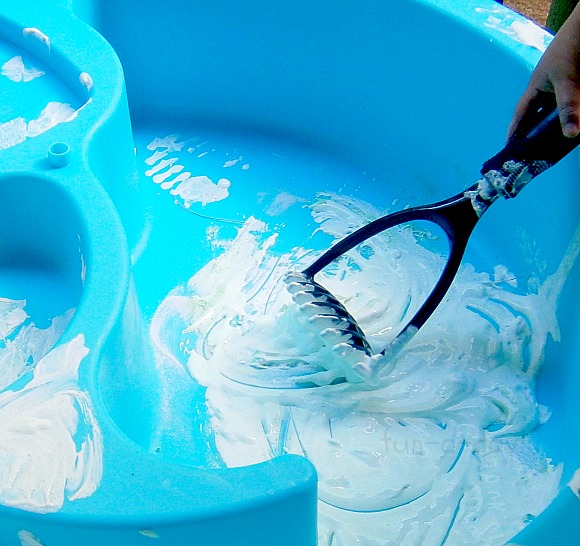 The following day, I tried something a little different with the Cool Whip.  Again, I mixed some Jell-O powder into the whipped topping, as it provides a stronger scent and changes the color.  I went with lime in one batch and mango in the other.  Once I had the Jell-O all mixed in, I spooned the mixtures into ice cube trays.  Then into the freezer they went!  I only used the ice cube trays because I wanted handheld pieces.  Next time, I think I’ll just put each batch into its own container.  It was a little annoying to remove the frozen Cool Whip from the trays! 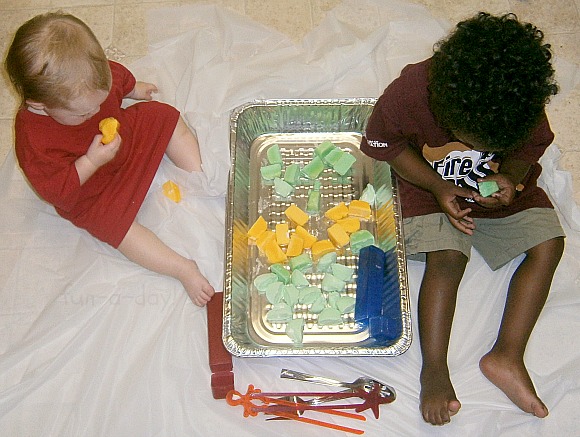 Since the weather was nuts that day, I placed the frozen Cool Whip into a large pan on the floor in the kitchen.  Little Hurricane was sweet and attempted to lay down a plastic tablecloth underneath the pan.  At first, the kiddos just grabbed the icy Cool Whip and held a piece in their hands.  Hurricane exclaimed, “It’s cold!” with a big smile on his face.  Diva, of course, taste tested her cube.  Based on her facial expression, she does NOT care for mango!  🙂 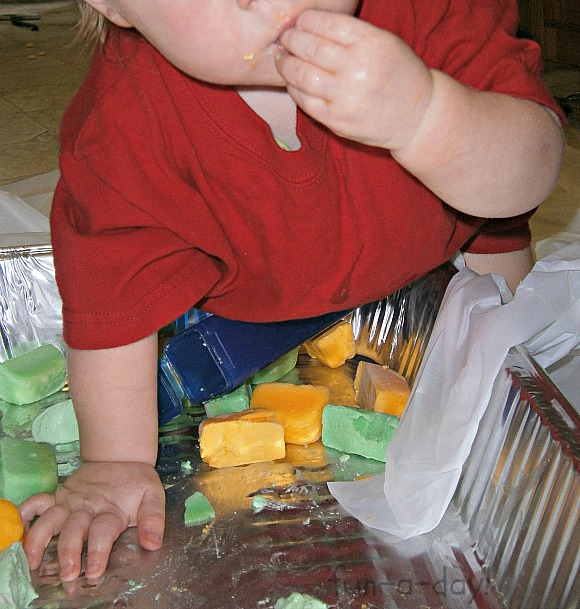 I had fun playing with the frozen Cool-Whip with them!  It felt a bit like ice cream, although it melted much slower.  It had a creamy texture to it, of course, and it was certainly cold!  The Jell-O added a slightly gummy feeling once it was more melted. The kiddos played with the frozen Cool Whip cubes for about half an hour, then I wiped them both down, and we were onto something else.  After about an hour, Little Hurricane and I revisited the thawing cubes.  It still had a creamy texture, but the thawing process brought the gelatinous feel to the forefront.  Little Hurricane LOVED this version of the cubes!  He had so much fun squishing it and putting his arms into the mixture, then wiping my arms up and down with it!  🙂 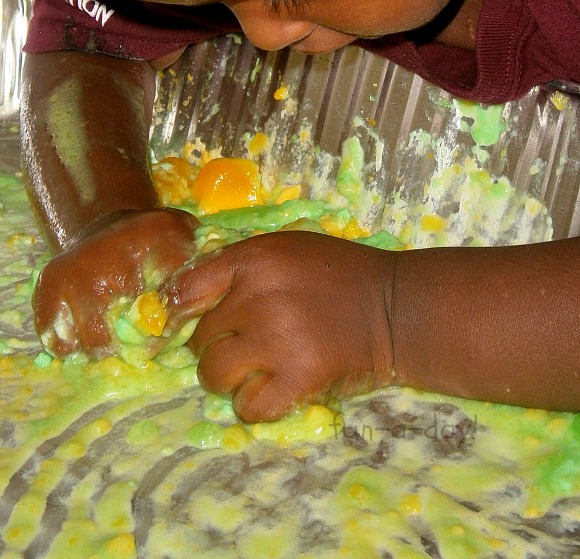 For more ideas for the littlest ones, please stop  by my Baby and Toddler Pinterest board.

For some other resources that appeal to that sweet tooth, click on the images below!