We use affiliate links and may earn commission from purchases made through those links.
Home / Early Learning / Water Versus Oil {A Sensory Play Experiment} 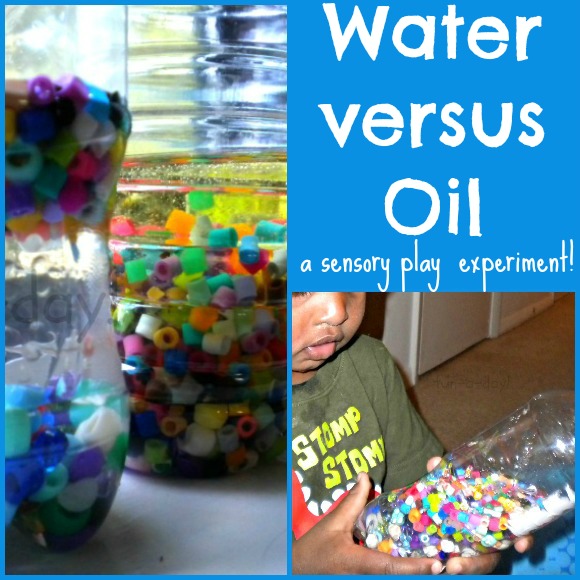 This little activity was created on the fly with my babysitting kiddos.  Frat Boy was down for a nap, while Girly Girl, Determined Diva, Little Hurricane, and Captain America were itching for something different.  That’s how this sensory play experiment came into play!

Determined Diva wasn’t interested in playing with any of her baby toys, and she really wasn’t up for me moving too far away from her.  I had to change Little Hurricane’s diaper, and I wanted her distracted for a moment.  So I grabbed a plastic bottle from my stash in the craft closet, along with some beads that were stored on the door of the closet.  Beads in a plastic bottle gave Miss Diva something to explore with her eyes, her hands, her ears, and even her mouth, in a safe manner.  Needless to say, I was able to get Little Hurricane’s diaper dealt with, and my hands cleaned, without upsetting the littlest one. 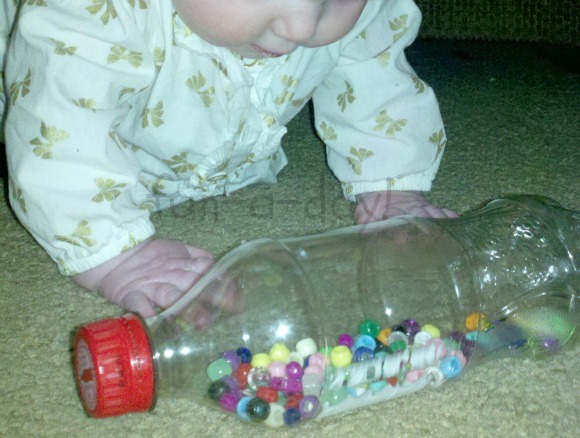 Determined Diva stared at the bottle for quite some time, then proceeded to push it a little bit.  This cracked me up, as she was very startled by the noise the beads made when she moved the bottle!  Once she was used to the noise, she pushed it around a bit and decided to taste the bottom of the bottle.  She gave up on that and went back to staring at it, pushing it, and trying to pick it up. 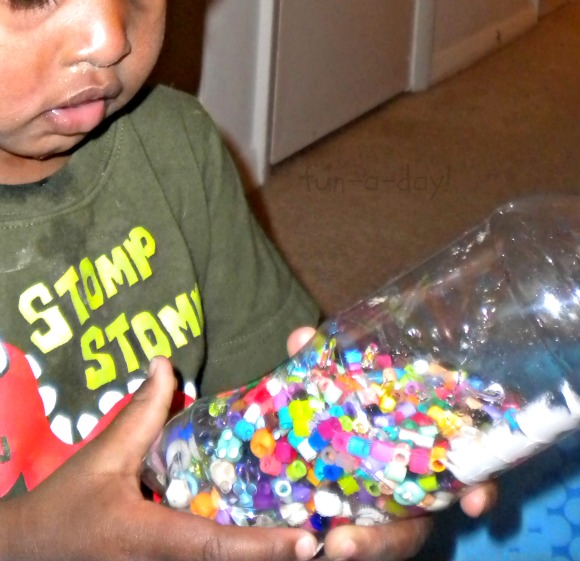 Little Hurricane had to get in on the action, of course.  Being the 2-year old that he is, he grabbed the bottle and shook it as hard as he could.  At that point, I was regretting all the beads I had put in the bottle!  Captain America and Girly Girl weren’t too happy with it either. Hoping to stave off a mutiny, and hoping to keep my eardrums intact, I brought all the kiddos onto the floor with me.  I gave them plastic bottles and set out beads.  Girly Girl and Captain America became intent on placing beads into their bottles right away.  Girly Girl wanted all of the flowery, glittery beads, while Captain America was more focused on volume.  Little Hurricane had a blast putting beads in his bottle, then shaking them out all over the floor, then putting more beads in, etc. 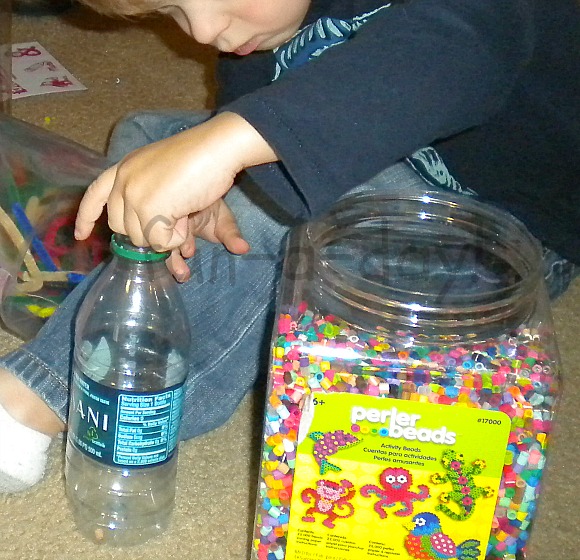 Once the kids were happy with the beads they had, I suggested adding water or oil to the bottles.  I told them we could be scientists and see how different the beads were in an empty bottle, in a bottle with water, and in a bottle with oil.  Little Hurricane’s bottle got water added to it, as did Girly Girl’s.  Captain America opted for the oil just to be different (which I appreciated).  Determined Diva hung out nearby, supervising and offering up random opinions. 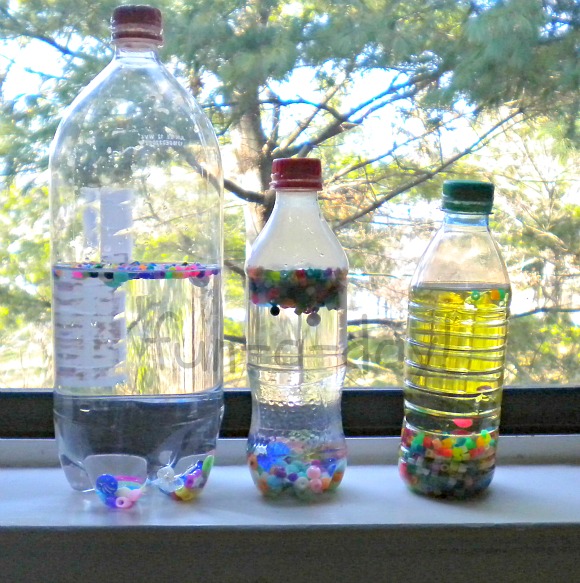 It was, as usual, so much fun to observe the kiddos during this little experiment —

I love to see the kids’ brains engaged when we’re messing around with random items!  My dad and stepmom came by that evening, and Dad was very confused as to why we had bottles of beads in the kitchen window.  So they were a conversation piece, as well!

Have you ever done an on-the-fly experiment like this?  I’d love to hear about any you’ve tried out!

Preschool Teacher 101 has created some amazing preschool lesson and activity plans that will be perfect for your classroom. Click on the images below to learn more about each resource. 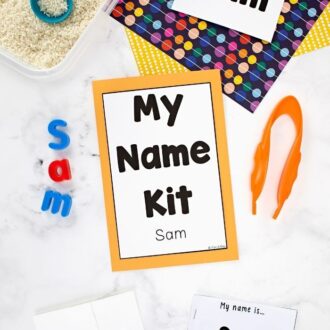