We use affiliate links and may earn commission from purchases made through those links.
Home / Early Learning / Football Brownies and Books for Game Day

My son and I love cooking and baking together. So, when the J.M Smucker Company asked me to “mix up a moment” using Pillsbury™ brownies and frostings from Walmart, I was completely on board! We got into the Game Day spirit, making football brownies AND football field brownies. We’ll be nibbling them as we cuddle up and read some football books together so we’re ready for the Big Game.

Are you following my Cooking with Kids Pinterest board? 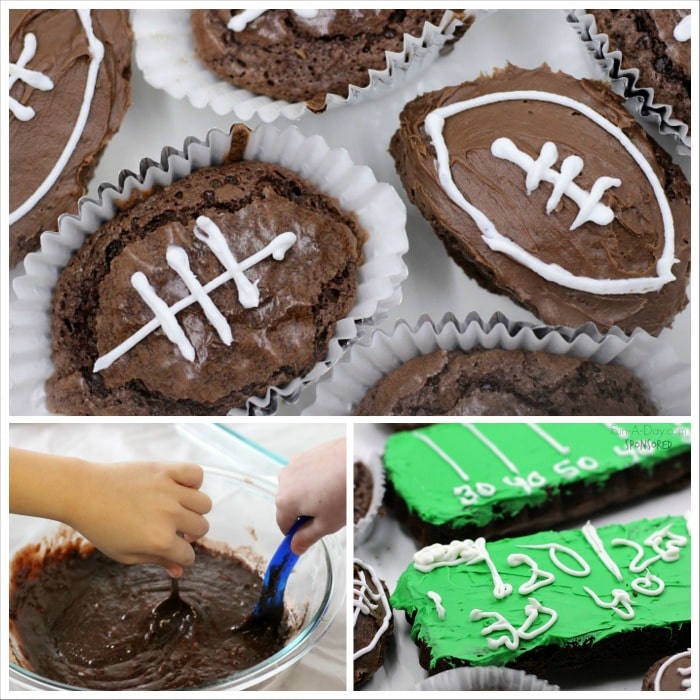 how to make football field and football brownies

Well, the kiddo and I already had one box of Pillsbury™ Chocolate Fudge Brownie mix, along with a Pillsbury™ Creamy Supreme® Vanilla icing container. I usually have at least one brownie mix stocked away for random rainy or snowy days with friends over. With our big plans, though, we needed some more! We headed to Walmart and grabbed another box of brownie mix and some chocolate icing. All the while, Engineer shared his plans for our Game Day brownie escapades!

When we got home, he invited one of his best buds over to help out. She was more than happy to be of assistance! The kiddos grabbed the brownie mix and set to work, with me as their assistant. I love how the Pillsbury™ Chocolate Fudge Brownie mixes have super simple directions. I turned the oven on and sprayed down three loaf pans while Engineer and his bud mixed up the brownie mix, water, oil, and eggs. Then we poured everything into the loaf pans and set it into the oven. Those loaf pans were our future football field brownies! 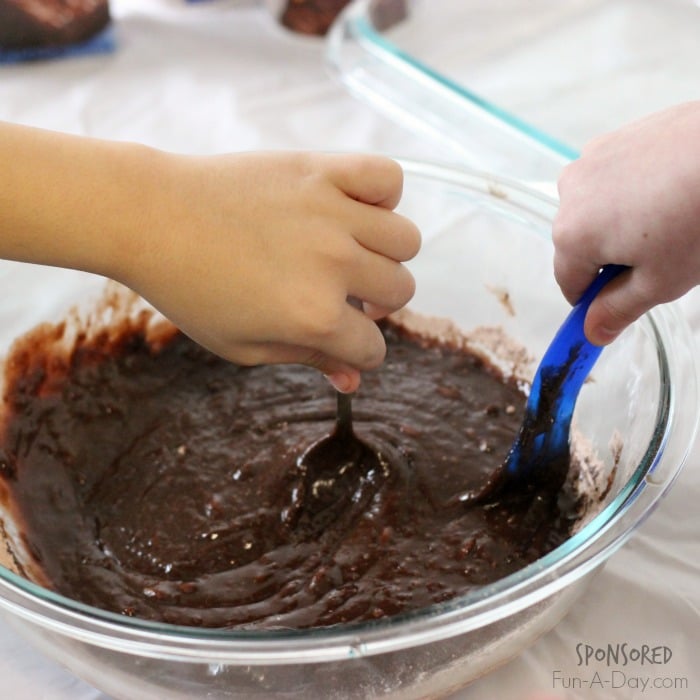 Next up was another batch of brownies. This time, we spooned the batter into individual cupcake baking cups. Since they’re meant to be used without a cupcake pan, I was able to press two sides together to form an approximation of a football shape.

Then everything went into the oven to bake. Out of this whole process, it was definitely the waiting that was the hardest on the kiddos! Not only did they have to wait while the brownies bake, but they also had to wait until the brownies were cool before we could decorate them! Waiting oh so patiently for brownies is a good time to read a football book or two. Check out my suggestions below. 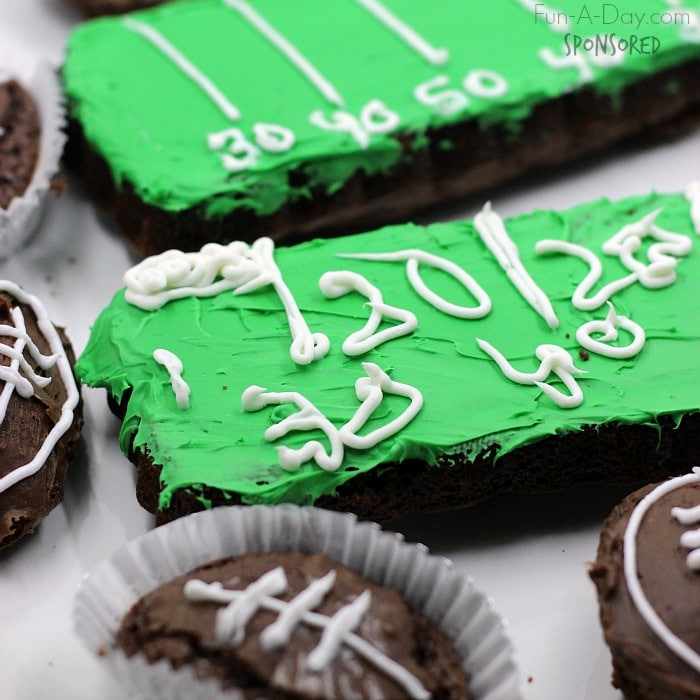 Once everything was baked and cooled (finally!), it was time for decorating! The kiddos wanted to make football fields first, so we added some green food coloring to our Pillsbury™ Creamy Supreme® Vanilla icing. Once the children approved of how “grassy” it looked, we spread the green icing on the brownies. Next, we added the yard lines. I spooned some still white icing into a plastic bag and added an icing tip to it. Then the kiddos used that to draw on the fields. Engineer even added goal posts to the end of his! 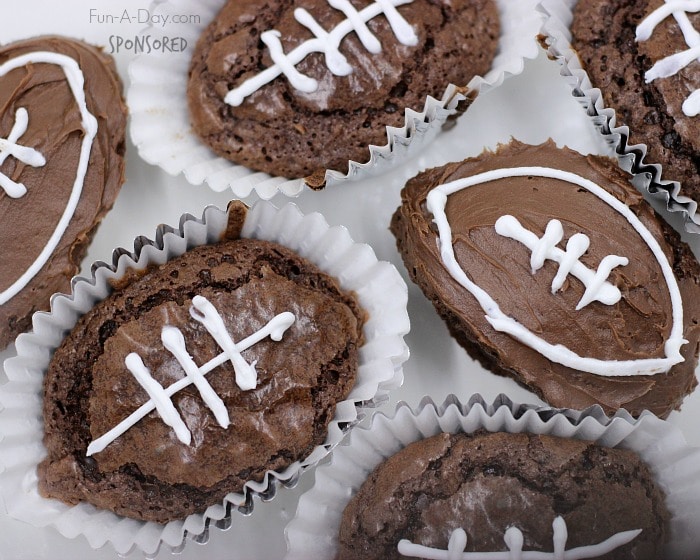 If you and the kiddos like baking together, be sure to stock up on some Pillsbury™ brownie mixes and frostings! Check out Pillsbury™’s Pinterest board for some inspiration, and don’t forget to grab a coupon before you head to Walmart! Now that we’ve made an epic amount of field and football brownies, we’re out of our stash! We’ll be popping out to get some more soon, as we have big plans for Valentine’s Day brownie treats – be sure to check back soon.

As I mentioned above, waiting for brownies to bake and cool is hard! So why not read some football books with the kiddos while you’re waiting? Or snuggle up and read while taste-testing the football brownies. Here are some books about football that you and the kids might find interesting – 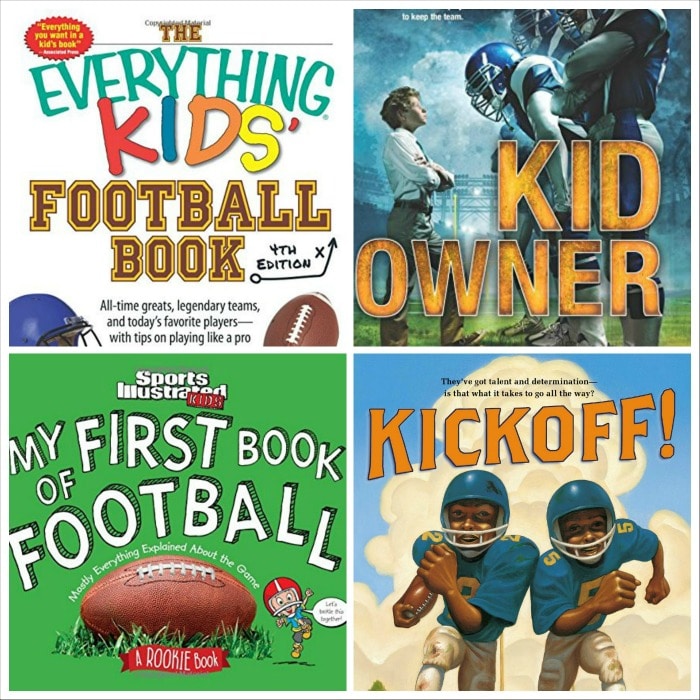 The Everything Kids’ Football Book by Greg Jacobs – A football reference book for kids, with facts, techniques, and history. This one seems like a good fit for a wide variety of kiddos interested in football and wanting to learn more about it.

My First Book of Football from Sports Illustrated Kids – This book uses real photos, along with a cartoon “rookie”, to explain the basics of the game.

My Football Book by Gail Gibbons – As with most of her books, Gail Gibbons explains the concept in kid-friendly ways. She shares the basics of football in an easy-to-understand read. Seems great for preschool through early elementary children.

Football with Dad by Frank J. Berrios – A simple and sweet book about spending Game Day with dad. Just right for preschoolers and early elementary kiddos.

The Dog that Stole Football Plays by Matt Christopher – Mike has an advantage – his dog is telepathic and tells him about the other team’s plays. Then he starts wondering if that’s cheating. This book seems good for kiddos who are just starting to read on their own.

Kickoff! by Tiki and Ronde Barber – Football-loving twins start junior high and have to deal with the changes this has on their football playing. For kiddos who are in third grade and up.

Kid Owner by Tim Green – This one is suggest for children in 4th through 7th grades. Ryan unexpectedly inherits ownership of the Dallas Cowboys when his dad dies.

What are your Game Day plans? Will you be making football brownies and reading some football books beforehand? 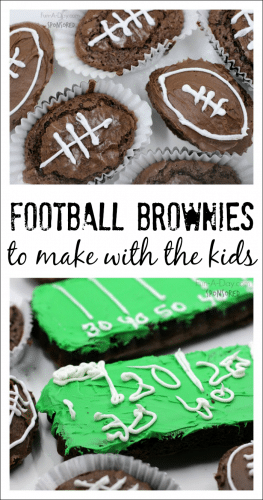 This is a sponsored conversation written by me on behalf of The J.M. Smucker Company. The opinions and text are all mine.